« said no one ever (again) | Main | On the Visual Thesaurus: The lingo of film noir »

On November 8, photos from the set of Season 5 of the Netflix series The Crown showed actress Elizabeth Debicki wearing a copy of the clinging, shoulder-baring black silk dress worn by the princess to a 1994 dinner at the Serpentine Gallery in London. 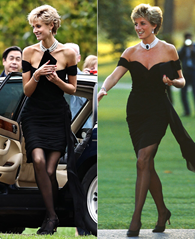 Elizabeth Debicki (left) in The Crown, wearing a copy of the dress worn by Diana, Princess of Wales, in 1994 (right). Diana was famously—even infamously—slender, but Debicki looks downright gaunt. Maybe it’s just the pose.

The dress has been interpreted as having been worn “in revenge” for the televised admission of adultery by her husband, Charles, Prince of Wales. … Following the dinner, the dress was described as the “I’ll Show You dress”, the “Serpentine Cocktail” and the “Vengeance dress”, as well as the “Revenge dress”. In her 2007 book The Diana Chronicles, Tina Brown wrote that Diana’s dress was known by fashion editors as “her fuck-you dress”.

It wasn’t just the one dress: An Instagram account called Lady Di Revenge Looks has been active since July 2018 and has 118,000 followers; a book is forthcoming.

The fashion press found a second “revenge dress” on November 11, after Taylor Swift wore on off-the-shoulder black number during her appearance on Late Night with Seth Myers. 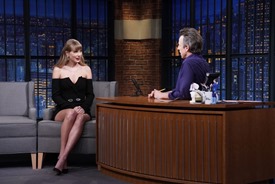 Unlike Diana’s dress, Swift’s had long sleeves, a belt, and pockets (or pocket flaps), but that didn’t keep Elle, for one, from drawing comparisons to Diana and speculating that the singer was using fashion to get even with her manager. I’m not quite sure how that works; maybe someone can explain.

In any event, there’s been a lot of revenge dressing this year, even among the common folk. In June 2021, the fashion blog The Zoe Report included revenge dress (“any jaw-dropping dress or outfit worn immediately after a breakup, with the aim of showing your partner exactly what they’re missing”) among its hot new trends, and quoted Dione Davis, design director at fashion label Tibi: “ Last summer, Davis says it was all about the lighthearted cottagecore energy, which was usually paired back to Birkenstocks or pool slides. However, this season things are taking a dramatic turn. ‘There’s also a 2021 variation of the revenge dress that is long, fitted, and has a cutout,’ the expert notes.”*

But be careful throwing around the revenge dress label, says Lis Smith:

Every off the shoulder black dress is not a Princess Diana revenge dress. Overuse of the term has rendered it meaningless.

But the OED doesn’t have revenge dress or any of these new revenge terms:

Revenge tour. There are lots of examples in sports (basketball, football, women’s soccer). But the revenge tour that first caught my attention was the one launched in June by former President Trump, a man for whom revenge is a primary, and possibly the sole, motivation.** His vengeance was directed at Republicans who refused to go along with the Big Lie that he’d been reelected. Yes, there are T-shirts—the economy-class equivalent of a revenge dress.

Revenge travel is more recreational than a revenge tour, but it’s still characterized by a sense of getting even. (As is “Montezuma’s revenge,” a colloquialism for “traveler’s diarrhea,” especially when contracted in Mexico. Fun fact: The Random House Historical Dictionary of American Slang cites Tennessee Williams as the first person to use “Montezuma’s revenge” in print, in his play The Night of the Iguana, published in 1961.) In an October 9 article for Forbes, Rachel King wrote:

Pent-up demand to travel freely again, or as freely as can be under COVID restrictions, has resulted in an increase in “revenge travel.” That has come to mean the strong desire to travel even more than before the onset of the pandemic—more about getting revenge on the coronavirus and more than a year lost to lockdowns.

Revenge body. A relative oldie, announced in 2015 as the title of Khloé Kardashian’s “reality” show, which debuted in January 2017 on the E! network. “The series features two people in each episode who get a makeover using assistance of personal trainers and stylists leading to a ‘major transformation inside and out’” (Wikipedia). Kardashian, or someone on her staff, is said to have conceived the show after her well-publicized breakup with Lamar Odom. “The best form of revenge is a good body,” she opined to People magazine in December 2020.

Revenge cleanse. Like all “cleanses,” it’s essentially a liquid diet—in this case, an expensive one. Who’s avenging whom is unclear.

Revenge shopping. ““People are looking to ‘revenge shop’ after being stuck at home for so long and are excited to refresh their wardrobes.” a Pinterest insights manager told Glamour’s Leah Bourne in May 2021.

Wrinkle Revenge. The brand name of a family of skin products from DERMAdoctor. Product copy: “Getting revenge on wrinkles has never been more refreshing!” The name has been a registered trademark since June 2006.

Revenge bedtime procrastination. A direct translation from a Chinese idiom.

Learned a very relatable term today: “報復性熬夜” (revenge bedtime procrastination), a phenomenon in which people who don’t have much control over their daytime life refuse to sleep early in order to regain some sense of freedom during late night hours.

In a follow-up tweet, Lee noted other pandemic-inspired revenge terms: “Then there are post-covid ‘revenge buying’ and ‘revenge saving’ — everything we do is a revenge nowadays because of our constantly exacerbated rage.” She linked to a South China Morning Post story about China’s economy (paywalled) whose headline included the term “revenge spending.”

“Revenge” seems like a curious word choice here: I’d be more inclined to use “spite,” as in the old saying “Don’t cut off your nose to spite your face.” But “spite procrastination” or “spite buying” or “spite dress” don’t seem to suit the current mood; “spite” implies malice and annoyance, while “revenge” seems, somehow, righteous. Arthur C. Brooks tried to explain in The Atlantic in June 2021:

Revenge bedtime procrastination seems illogical, insofar as the perpetrator and the recipient of the revenge are the same person. But the explanation is fairly straightforward: It happens when a person harbors some deep resistance to being “told” what to do in an area as personal and fundamental as when to go to bed, likely because she resents being told what to do in other parts of her life. So she fights back by exerting her own authority and staying up.

Will we be stuffing the Thanksgiving turkey with revenge dressing this year? I can imagine the ingredients, all of which cost a fortune and aren’t especially good for you: truffles, oysters, bacon, macadamia nuts, foie gras. It’s a dish best served hot; the revenge diet can wait.

* I’ve been meaning to write something about this fashionspeak use of “pair back,” which translates to “paired with,” and may represent a misunderstanding of “pare back” (to reduce) with overtones of electronic-device “pairing.” “Pair back” and “paired back with” are ubiquitous among stylists, copywriters, and “fashion influencers.” As for cottagecore, I wrote about it in September 2020.

** It’s a dominant motif in much of contemporary culture, too, from The Sopranos to Game of Thrones to Succession.

Posted at 06:00 AM in Chinese, Fashion, History, Retail, Television, Word of the Week, Words | Permalink

This kind of "revenge" seems more like passive aggression.

Bet you a fiver that Camilla Parker-Bowles has never owned a revenge dress. The best revenge is to not need it, at least publicly.