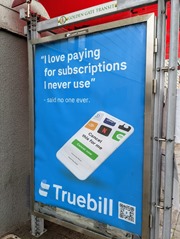 “‘I love paying for subscriptions I never use’ said no one ever.” Truebill, founded in Maryland in 2015, calls itself “the money app that works for you.” Spotted on North Point near Hyde Street, San Francisco.

And here’s an ever-less version, also spotted within the last week: 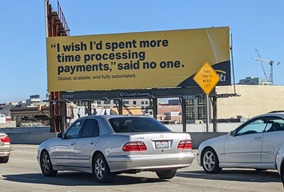 “‘I wish I’d spent more time processing payments,’ said no one.” Spotted on the eastbound approach to the Bay Bridge. (Excuse the terrible one-handed shot that obscures the logo.) The advertiser is Tipalti, founded in 2010 and based in San Mateo, California. The CEO is Israeli; the company’s name is a Hebrew word that translates to “I handled it,” although the website claims it’s “We handled it.” (The plural pronoun takes a different suffix: tipalnu.)

Know Your Meme wrote about “said no one ever” sometime in 2013, noting that the phrase was “often used online to mock something that is generally disliked.” KYM traces “… said no one ever” to a single-topic Tumblr blog, “Shit No One Has Ever Said,” that launched in May 2010. The inverted phrasing showed up shortly afterward on Twitter.

"I see you're admiring my striped vest," said no one ever.

But! In a comment on my 2016 post, Ben Zimmer noted that Amy Poehler had used the sentence tag “… said no one” on an installment of SNL’s “Weekend Update” as far back as October 2004:

Britney Spears is recording a rap song about the recent controversies in her life. “I can’t wait to hear that!” said no one.

It took the advent of social media, though, to get everyone saying “… said no one ever.” In 2013, the Denny’s chain ran ads with quotes attributed to “no one ever.” 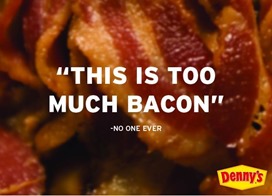 The first Urban Dictionary definitions also appeared in 2013. Here’s an erudite-sounding one: “Declarative phrase appearing at the end of a statement which effectively negates the meaning of the previously stated text.”

In 2015, Jana Kramer released a catchy country song titled “Said No One Ever.” The first stanza:

By then, some people had seen enough. In a column published in The Guardian on May 14, 2015, British author Emma Brockes, who is based on New York, called for a cease-and-desist order. She’d seen “…said no one ever” ads for Carnival Cruise Lines, the Chicago Transport Authority, an Australian cleaning product called Handee, and Manhattan Mini-Storage. Alas, she didn’t link to any of them, and the only one I was able to find was the mini-storage ad.

“‘It looks like this because I’m planning on buying a pig,’ said no one ever.” This ad for Manhattan Mini-Storage appeared in New York subway stations in Fall 2014.

It’s hard, I know. One becomes very attached to these sayings. And it will be a pain to have to think of something new to say when, tomorrow, an issue comes along simply begging for your commentary.

I would, however, urge you to try your best, so that next time you think about typing “Who does that?” or “how’s that working out for you?” or “Shut. The. Fuck. Up” into Facebook, remind yourself that what you’re about to share is approximately as funny as “get a room!” or “talk to the hand!” were in 2003. This way, it won’t be long before these threadbare phrases die out, so that “Said no one ever,” said no one ever. (Sorry)

As if! (Remember when that phrase was on everyone’s lips? I’ll remind you: 1995.) Somehow, “… said no one ever” keeps being said, and said, and said again. I wish we knew how to quit you, Dumb, Unfunny Meme. There. I said it.

Language dates us as much as our clothes. Depending on your tolerance, it's charming or cringey. I dated myself recently by asking a young florist to make me a bouquet "slightly smaller than a Beetle"; he had no idea.

Memes like "No one ever" are mayflies, advertising doing its job. Whatever (probably similar era as As if).