Film noir is often associated with visual tropes such as wet city sidewalks, deep shadows, and oblique or “Dutch” camera angles. (“Dutch” here has nothing to do with the Netherlands; it’s a corruption of “Deutsch,” or German. German filmmakers introduced the technique as part of Expressionist style, and many of them brought it with them to Hollywood when they fled Nazism in the 1930s.) But it’s also marked by a linguistic style: quick-paced and slangy, yet restrained by the self-censorship rules of the Motion Picture Production Code.

The Code, which held sway between 1934 and 1968, prohibited a wide range of language in Hollywood scripts. Damn and hell were taboo “unless used reverently”—“Damn the torpedoes, full speed ahead!” was nixed in a World War II movie—and stronger language was simply out of the question. So were a lot of words that seem innocuous to us in 2021: broad (a woman), cripes (a “minced oath” derived from “Christ”), lousy, and nuts (“except when meaning crazy”). A character could say that a scheme “sounds nuts,” but he couldn’t exclaim “Aw, nuts!” when the plan was foiled. (Read more about the evolution of nuts in my March 2021 post for the Strong Language blog.)

The latest issue of Noir City magazine, published by the Film Noir Foundation right here in the Bay Area. The cover story, about noir regular Gloria Grahame, is terrific, and its author may surprise you: Dana Delaney, perhaps better known for her role in the TV series “China Beach.” She’s good! 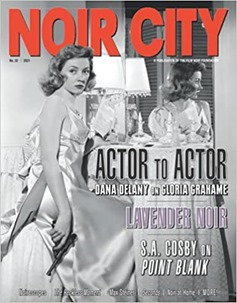 The only place to buy the print edition this issue of Noir City is on A****n, I’m sorry to say. The digital edition, with links to video clips, is available with a donation of $20 or more to the Film Noir Foundation.

It isn’t specific to noir, but an expression I heard in Detour (1945) sent me down an interesting rabbit hole of American slang. At about 18:30, the character named Haskell tells the hitchhiker he’s just picked up about the woman who scratched his hand: “Stopped the car, opened the door … ‘Take it on the Arthur Duffy, sister,’ I told her.”

Turns out lots of people in the first half of the 20th century knew about Arthur Duffy (or Duffey, as his name sometimes appears). He was an American sprinter, born in 1879, who competed in the 1900 Olympic Games in Paris and in 1902 set a world record, running the 100-yard dash in 9.6 seconds. (In 1905 he confessed to taking sponsor money, and the AAU ordered his records expunged. This sounds so quaint now, doesn’t it, both the confessing and the expunging.) He was still alive when Detour was released—he died in 1955—and his name had become synonymous with “speed.” To “take it on the Arthur Duffy” or to “do an Arthur Duffy” was to leave quickly, to beat it, to am-scray.

O. Henry may have been the first writer to use the expression in print. In “The Tale of a Tainted Tenner” (1905), he wrote: “I never knew a really cultured and educated person that could afford to hold a ten-spot any longer than it would take to do an Arthur Duffy to the nearest That’s All! sign or delicatessen store.” (Thanks to Ben Zimmer for that citation.)

Use this link to watch Detour free on YouTube, but skip the closed captions, which are laughable. If your library system offers free videos via Kanopy, you may be able to find it there, too. Viewer beware: The version included with Amazon Prime membership is colorized, which is needless, appalling, and heretical.

Posted at 07:00 AM in Film, Lingo, Slang, Visual Thesaurus | Permalink