« On the Visual Thesaurus: Where Do Place Names Come From? | Main | Forever words »

It was my bad luck to schedule the outgoing portion of the trip via Southwest Airlines, which had just canceled more than 2,000 flights and rescheduled my own 8:10 a.m. flight three times between 4 a.m. and noon, when we finally took off, because of  …  reasons. “Weather”? (Other airlines didn’t seem to have the same problem.) Pilots protesting vaccination requirements? (More plausible, but denied by the pilots’ union.) Because of all the delays, I did a lot of walking around the Oakland airport. I hadn’t remembered previously seeing the Mamava breastfeeding pod, which made me smile. Good idea, nice name, cute logo with a hint of boobage. The company is based in Burlington, Vermont. 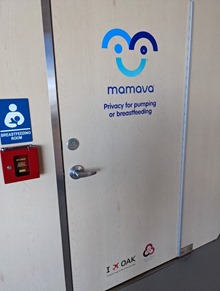 In the Denver airport, it’s “Got Oxygen?” rather than “Got Milk?” The altitude will sneak up on a flatlander if you don’t watch out. I didn’t take any supplemental O2, but I did drink gallons and gallons of H2O, and zero coffee or alcohol. 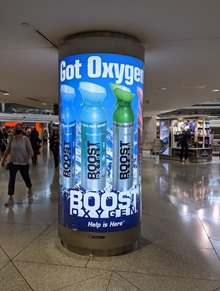 In Denver I stayed at the Queen Anne Bed and Breakfast, which is charming, quiet, and very well situated—less than a mile from the downtown core, which is unusual for a B&B. 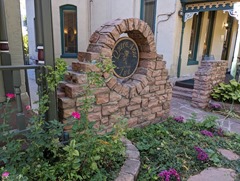 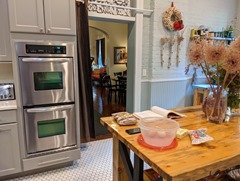 Kitchen, dining room. There were fresh pastries and cookies every day, and many of the vegetables came from the inn’s own gardens. Other ingredients are locally sourced. 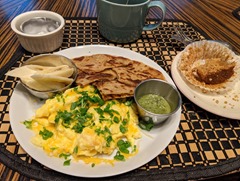 Breakfast. The Queen Anne’s owner/chef, Milan Doshi, is the son of Indian immigrants, and he likes to give a little Indian twist to his menus (parathas and green chutney here).

When I heard that Meow Wolf had just opened a Denver location, “Convergence Station,” I immediately booked a ticket. Meow Wolf began in 2008 as an artists’ collective in Santa Fe, and is now a multimillion-dollar business with permanent exhibitions in Santa Fe and Las Vegas as well as Denver. 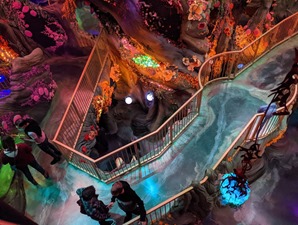 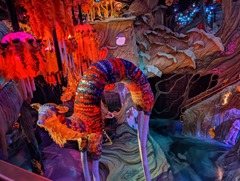 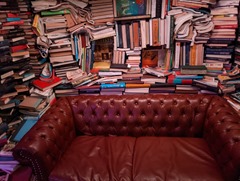 The official description says there’s a “rich underlying narrative,” but it eluded me. Maybe it was in the site’s special (invented?) language. 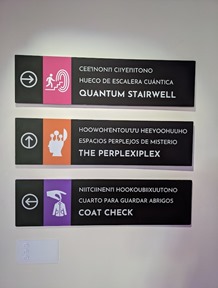 For more, watch the trailer for the Meow Wolf documentary. If you decide to go, plan on spending about an hour there. (Other people recommended two to three hours, which I cannot even imagine, frankly.)

Speaking of whimsy, several of the friends I’d arranged to meet in Denver were staying at the Curtis Hotel downtown. It’s part of the Kimpton chain, which is famous for its quirky décor. 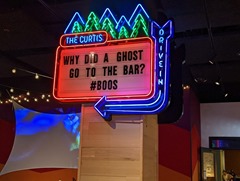 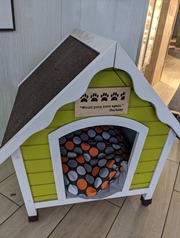 A doghouse in the lobby. 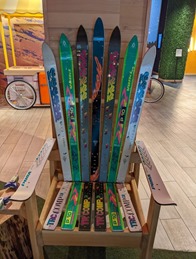 A chair made of skis (very Denver!), also in the lobby. 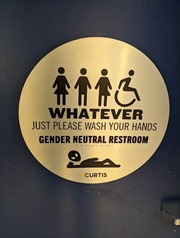 The Molly Brown House Museum is a fine example of Rocky Mountain Mining Wealth Victorian architecture as well as a glimpse into the life of one of Denver’s most interesting women. 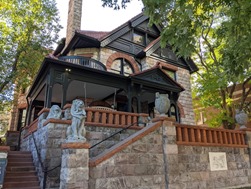 Lions! Sphinxes! Urns! Let’s put them all out there. 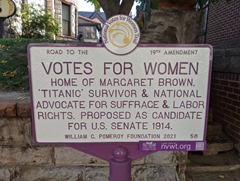 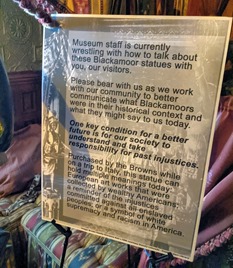 In Titanic (1997), “the unsinkable” Molly Brown was played by Kathy Bates. The real Molly Brown survived the 1912 sinking by climbing into Lifeboat #6 after helping others board the tragically inadequate lifeboats. 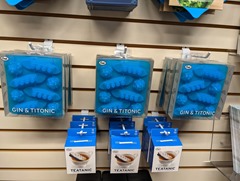 The Titanic angle is played for all it’s worth in the gift shop. Gin & Titonic! Teatanic tea infuser!

Wherever I go, I find apostrophe abuse. This example was in a large window sign at Eufora, a global hair-care company whose tagline is “Beauty Without Compromise.” They reserve their compromises for punctuation, I guess. 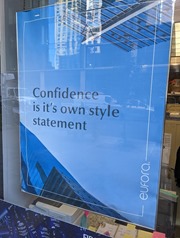 The centerpiece of my Denver visit was the opening of “Too Fast to Live, Too Young to Die Redux” at the Emmanuel Art Gallery on the University of Colorado Denver campus. 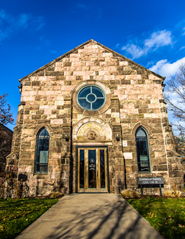 The beautiful Emmanuel Gallery is housed in a former synagogue (hence the name). This is the gallery’s photo; I managed to forget to take one of my own.

The exhibit showcases part of the vast punk/New Wave collection of Andy Krivine, a cousin of my longtime friend Jane Krivine, who flew to Denver from Israel to attend the show. I met Andy in in New York in 2019, when the Museum of Art and Design showed a larger swath of his collection. (See my Twitter thread about the 2019 show.) 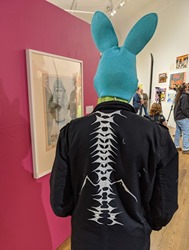 This exhibit-goer really channeled the spirit of the show. 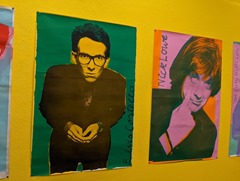 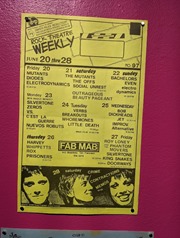 A calendar from the Mabuhay Gardens (the Fab Mab) in San Francisco. I once saw the Cramps and the Nuns perform there.

The Clyfford Still Museum is devoted to the life and work of an American abstract-expression pioneer. Still (1904–1980) stipulated in his will that his huge body of work—literally huge; many canvases measure 12 by 15 feet—go to an institution that would display no other artist. Denver won the bidding over 19 other cities even though Still—a North Dakota  native who worked mostly in Washington State, San Francisco, Baltimore, and New York—had virtually no Colorado ties. 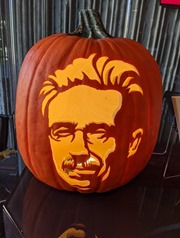 I’m not a huge fan of abstraction, but I find Still’s work impressive, and it’s beautifully displayed in the museum. 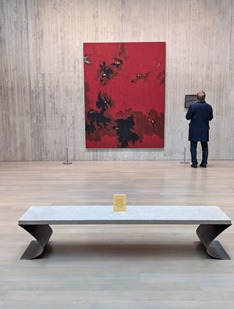 The red paint used in “PH-385,” above—Still was not an imaginative namer—is called Turkey Red, and it’s surprisingly evanescent. I love learning stuff like this.

Kudos to whoever named the museum’s school program “inStill.” 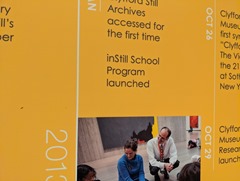 For the return journey, I avoided Denver’s daunting airport and booked a roomette on Amtrak’s California Zephyr. I spotted a LugDen luggage-storage van outside Denver’s magnificently restored Union Station and thought it was a good idea and a good name: DEN suggests both Denver and “a safe, cozy space.” 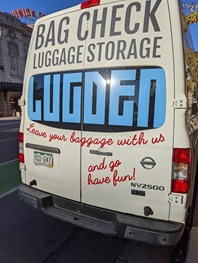 The station itself—a restored Beaux Arts/Renaissance Revival building with good restaurants and an outpost of The Tattered Cover independent bookstore—was decked out for Halloween. 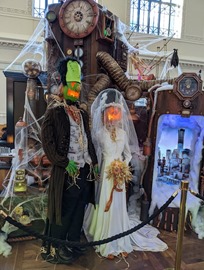 The train arrived in Emeryville exactly 10 minutes behind schedule, not at all bad for a route whose total travel time (from Chicago) is 54 hours. The views along the route are spectacular, and the food—especially the vegan chili—was quite good, although tomatoes in Caesar salad are kind of heretical IMO. 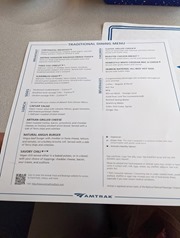 Related: On the Brand Trail: Minneapolis (2010)

Posted at 07:02 AM in Art, Branding, History, In the Wild, Naming, Signs, Travel | Permalink

What a wonderful post, Nancy! I enjoy all of yours, but right now it is particularly delightful to get these glimpses into what you see when you travel. I don't know Denver at all, but you've raised it on my horizon. More importantly, you've given me some new invitations to go outside my comfort zone when next I travel (like into spaces with loud techno music) for the sake of the adventures I may find.
Also, yes, train travel - so civilized!

Indeed a wonderful post - and I was there. Nancy - you are so observant. I am embarrassed by the things I didn't notice. How could I have missed the chair made of skis at the hotel I was staying at. In the event, a good writer is a good observer, and that is you.