« On the Visual Thesaurus: Turduckenyms | Main | New on Medium: The valley of the S-word » 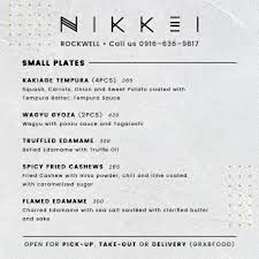 First, the Nikkei in “Nikkei cuisine.” (It’s commonly capitalized, although I’m not sure why.) The word was coined by an international group of scholars working on the International Nikkei Research Project, a three-year collaborative project that culminated in two volumes published in 2002. The word is a portmanteau of the Japanese words for “Japan” (the Ni- in Nihon) and “descendants”; it’s often interpreted as “the worldwide Japanese diaspora” or “Japanese migrants and their descendants.” But there’s more to it than that, the Discover Nikkei website points out:

The term Nikkei has multiple and diverse meanings depending on situations, places, and environments. Nikkei also include people of mixed racial descent who identify themselves as Nikkei. Native Japanese also use the term Nikkei for the emigrants and their descendants who return to Japan. Many of these Nikkei live in close communities and retain identities separate from the native Japanese.

In other words, “Nikkei” is not specific to Peru, which has South America’s second-largest population of Japanese descendants, after Brazil (the former Peruvian president Alberto Fujimori was one of them). In restaurant-speak, however, it seems to have acquired the narrower meaning. According to a well-researched 2019 article for Eater by Monica Burton, “Nikkei food is Peruvian ingredients — tropical fish, quinoa, aji amarillo peppers — molded by Japanese techniques.” Burton writes that the Japanese-Peruvian Nikkei trend owes a lot to star chef Nobu Matsuhisa, who opened his first restaurant in Lima in 1973, but it didn’t really gather momentum until 2018, when the first explicitly Japanese-Peruvian restaurant, Once (pronounced like the Spanish word for “eleven”), opened in Las Vegas.

What about the name of the Nikkei stock index? It’s another portmanteau, created from Nihon Keizei Shimbun, or “Japan Economics Newspaper,” which publishes the index.

I know of two other words used to categorize people in specific ethnic diasporas. Desi (from a Sanskrit word meaning land or country) describes people from the Indian subcontinent; ABC stands for American-Born Chinese. Do you know of any other names like these?

The ni- in nisei comes not from Nihon but from the number ni (“two”).

Once I turned my attention to Nikkei-as-in-cuisine, I began seeing it a lot—including in the name of a sushi restaurant not far from my own Oakland neighborhood. (Oakland’s Nikkei Sushi appears to serve conventional sushi with no Peruvian influences.)

Speaking of restaurant names, how about “Chotto Matte”? It comes from a longer Japanese phrase meaning “Just a moment” or “Please wait a bit,” and it supposedly refers to “quick-fire Nikkei cuisine.”

Posted at 06:00 AM in Food and Drink, Japanese, Portmanteaus, Word of the Week | Permalink

The New Yorker writer John McNulty said second- and subsequent generation Irish-Americans were referred to as "narrowbacks," with the implication that they had risen far enough on the social scale not to have to work as ditch diggers, hod carriers and other trades that demanded a broad (i.e. strong) back.