On August 31, the Texas legislature passed a draconian law that doesn’t just prohibit abortions after six weeks’ gestation, which is pretty outrageous by itself, it also encourages—indeed, incentivizes--citizens to snitch on each other. Where have I heard this before? Oh, yeah: “I saw Goody Osburn with the devil!” 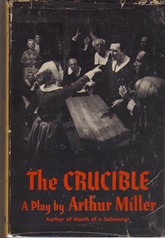 “The more I read into the Salem panic, the more it touched off corresponding images of common experiences in the fifties: the old friend of a blacklisted person crossing the street to avoid being seen talking to him; the overnight conversions of former leftists into born-again patriots; and so on.” – Arthur Miller, “Why I Wrote ‘The Crucible,’” The New Yorker, October 21, 1996

The U.S. Supreme Court refused to hear emergency appeals from abortion providers, even though the law violates long-standing precedents, including Roe v. Wade (1973). Reporter Neelam Bohra of the Texas Tribune, an independent media organization, published an excellent summary under what must have been intense deadline pressure, and it’s worth your time. You may also want to send a few bucks to Planned Parenthood or NARAL Pro-Choice America or the Lilith Fund or any of the organizations named in this Twitter thread.

The Texas abortion law allows you to sue people for *intending* to help someone get an abortion. Everyone in the US has standing to sue. The law exempts you from the usual safeguards against frivolous suits. The minimum amount you can sue for is $10k. There is no maximum. https://t.co/fVEhpvOFnX

Speaking of Goody Osburn and her friends: Anne Applebaum—a historian best known for her writing on Russia, Putinism, and Central and Eastern Europe—has a long article for the October issue of The Atlantic on “The New Puritans.” You can read it online now. I’ve been watching Netflix’s comedy-drama “The Chair,” which is reaffirming my decision to flee academia as fast as I could. One of its subplots highlights the consequences of the new puritanism and mob justice on campus. Here’s Applebaum:

Right here in America, right now, it is possible to meet people who have lost everything—jobs, money, friends, colleagues—after violating no laws, and sometimes no workplace rules either. Instead, they have broken (or are accused of having broken) social codes having to do with race, sex, personal behavior, or even acceptable humor, which may not have existed five years ago or maybe five months ago. Some have made egregious errors of judgment. Some have done nothing at all. It is not always easy to tell.

If you’re interested in this subject, I recommend one of the books Applebaum cites in her article: Unwanted Advances: Sexual Paranoia Comes to Campus, by Laura Kipnis.

And as long as we’re talking about higher education, I recommend “Cast Away from the Canon,” by Amna Khalid, who proposes a new way to read Robinson Crusoe, which has lately been targeted for banishment for perpetuating “racism, sexism, and unearned entitlement.” What if, Khalid writes, we instead read Defoe’s novel side by side with a story on which it may have been based, “Hayy ibn Yaqzan (Alive, Son of Awake), a philosophical tale by Abu Bakr ibn Tufayl, a 12th-century Arab polymath from al-Andalus on the Iberian Peninsula.” That does sound interesting. Will any literature departments take her up on it?

I’ll end on a lighter note: In the latest episode of Spectacular Vernacular, Slate’s new language podcast, co-hosts Nicole Holliday and Ben Zimmer chat with New York Times Spelling Bee editor Sam Ezersky (how does he decide which words are Bee-certified?) and then turn the mic over to linguist Lisa Davidson, who parses the name of Pfizer’s COVID vaccine, Comirnaty. (Loyal readers will recall that I also had Thoughts About Comirnaty.) Read an excerpt of the interview with Ezersky here; listen to the whole podcast here. (The full transcript is ... a little wonky, so listen instead.) Be sure to stay till the end for the Bee-inspired language quiz.

Have a restful weekend, or maybe an action-packed one, and let me know what you’re reading.

Shanah Tovah! Let's raise a drink (several if necessary) to a better 5782.

And thank you for the chilling Anne Applebaum quote.