Here’s one example of the problem:

With John Bowers and Clare Stanton, and the kind cooperation of The New York Times, I was able to analyze approximately 2 million externally facing links found in articles at nytimes.com since its inception in 1996. We found that 25 percent of deep links have rotted. (Deep links are links to specific content—think theatlantic.com/article, as opposed to just theatlantic.com.) The older the article, the less likely it is that the links work. If you go back to 1998, 72 percent of the links are dead. Overall, more than half of all articles in The New York Times that contain deep links have at least one rotted link.

At least the Times has a paper counterpart. A lot of online content is digital only. And then there’s all the content that’s untethered from the web: apps, TikTok videos, ebooks, and more.

One partial solution to the problem, Zittrain writes, is to make sure every link has an automatically generated copy. Enter Amberlink, “a tool for blogs & websites to keep linked content accessible”:

Researchers at the Berkman Klein Center for Internet & Society, which I co-founded, designed such a system with an open-source package called Amberlink. The internet and the web invite any form of additional building on them, since no one formally approves new additions. Amberlink can run on some web servers to make it so that what’s at the end of a link can be captured when a webpage on an Amberlink-empowered server first includes that link. Then, when someone clicks on a link on an Amber-tuned site, there’s an opportunity to see what the site had captured at that link, should the original destination no longer be available.

I’m not qualified to judge the technology, but I really like the Amberlink name. It’s clear, visual, evocative, and easy to pronounce. As a metaphor for withstanding the ravages of time, you can hardly do better than “amber.” 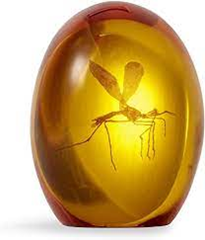 Amberlink is a case study in the benefits of lateral rather than literal thinking. Thinking literally about the ephemeral-link problem would yield predictable results with little emotional resonance—names like LinkSaver or PreservaClick.* Amberlink, by contrast, summons up color, heft, and the rootedness of trees.

Back in 2009 I judged another Jonathan Zittrain brand name, Herdict, pretty harshly. I stand by that judgment: Herdict is a bad name—a shitmanteau. I’m glad to know that Zittrain or his colleagues have gained some naming wisdom over the years, because Amberlink is as good a name as Herdict is a bad one.

I have just one quibble about Amberlink, and it’s kind of an amusing one. When you search for Amberlink online, the first two pages of results are all about … chickens. 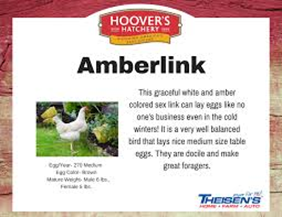 “Can lay eggs like no one’s business even in the cold winters!” Via Theisen’s

It turns out that there’s a hybrid chicken breed called Amberlink, developed in the U.S. in the 1970s and named for its sex-linked reddish-brown-tinged feathers. It sounds like an adorable bird: a champion egg-layer with a “friendly temperament” that “loves to play with you.”

There’s no record in the trademark database for the Amberlink fowl or the Amberlink web tool—just one abandoned mark for a missing child service called Amberlink, probably based on “AMBER Alert,” the emergency system that began in 1996. AMBER Alert was named for 9-year-old Amber Hagerman, who was kidnaped in Texas and brutally murdered; her name was turned into a backronym: America’s Missing Broadcast Emergency Response.

A duplicate name isn’t an insurmountable obstacle. (See my post about name multiples like Dove and Magnum.) A little more promotion would help the Zittrain Amberlink hold its own, searchwise, against the poultry Amberlink.

Amber has an interesting etymology, by the way. The word comes ultimately from an Arabic source, ‘anbar (or ‘ambar), which was borrowed into Latin and Middle French and finally Middle English. Amber came in two flavors: Ambre gris, “gray amber” (now spelled ambergris), is “a wax-like substance of ashy colour, found floating in tropical seas, a morbid secretion from the intestines of the sperm-whale” (OED). Ambergris was prized for its use in perfumes—a lot of seemingly icky substances are prized by perfumers—and also in cuisine. (King Charles II’s favorite dish was said to be eggs and ambergris.) Yellow amber is the fossilized resin of certain trees from the Baltic. (“Perhaps the perceived connection is that both [types of amber] were found washed up on seashores,” says the Online Etymology Dictionary. “Or perhaps it is a different word entirely, of unknown origin.”) Amber as a color name dates from around 1735.

And Amber has been a personal name since … not forever. 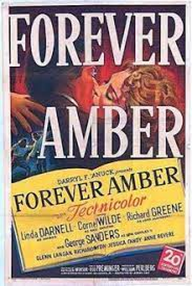 The 1947 film Forever Amber was based on the 1944 historical romance of the same title, by Kathleen Winsor, about the fictional 17th-century adventuress Amber St. Clare. Despite the book’s and movie’s popularity, “Amber” as a girl’s name didn’t catch on in the U.S. until the 1980s

* Zittrain and his colleagues have developed another preservation tool with a somewhat more literal name: Perma. Perma is an alliance of more than 150 libraries that can convert conventional links into permanent ones archived at http://perma.cc. Yes, it’s just a truncation of “permanent,” but I like Perma, too: it feels classic yet modern, and appropriately institutional.