« Why are we still calling it "Blackwater"? | Main | Name in the news: Comirnaty »

Here’s the definition posted on Urban Dictionary on June 27, 2020:

a person who consciously chooses to not wear a mask during covid-19. Not because of they medically cannot, rather because they generally do not care about other people’s health. Usually sighting [sic] inaccurate, disproven conspiracy theories that have been proven time and time again as factually inaccurate.

The example sentence: “look at the spreadneck with his Trump flag on the back of his lifted pickup.”

As portmanteaus go, spreadneck is pretty good: a blend of spread (as in “spreading the virus”) and redneck, a word that’s been in the North American lexicon since at least 1830, the date of the OED’s earliest citation (“This may be ascribed to the Red Necks, a name bestowed upon the Presbyterians in Fayetteville”). Here’s the OED’s definition:

A 1904 issue of American Speech, the journal of the American Dialect Society, included redneck in a list of dialect words, but the word wasn’t widespread until around 1915. Why red? “According to various theories,” the Online Etymology Dictionary says, “red perhaps from anger, or from pellagra, but most likely from mule farmers’ outdoors labor in the sun, wearing a shirt and straw hat, with the neck exposed.”

Redneck is sometimes reclaimed as a term of tribal pride: The Gulf Coast is known as the Redneck Riviera (“now a virus hotspot”—Associated Press, August 19, 2021); country singer Gretchen Wilson’s “Redneck Woman” spent five weeks at number one in 2004. (“’Cause I’m a redneck woman/I ain’t no high class broad/I’m just a product of my raising/I say, ‘hey yall’ and ‘yee-haw.’”) My favorite redneck lyric, though, is Lyle Lovett’s: “And I said ooh give back my heart chip kicker-redneck woman/Take your boots and walk out of my life.” Chip kicker, yeah!

There may have been earlier appearances of spreadneck on Twitter, but this is the oldest one I found:

“Spreadnecks” picked up steam on TikTok (see The Southern Momma, July 29, 2021) and on YouTube. A YouTuber who goes by Canknucklehead has also tried out “plague rats” and “Antiva.”

Sarah Smarsh, the Kansas-reared author of Heartland: A Memoir of Working Hard and Being Broke in the Richest Country on Earth (2018), mentioned spreadnecks in her August 7, 2021, essay for the New York Times Sunday Review, “What to Do with Our Covid Rage”:

I cringe when I see the rampant stereotypes on social media painting the unvaccinated as rural white folks, by now a frequent scapegoat for our country’s ills. “Spreadnecks,” I’ve seen them newly termed (as in, “rednecks” spreading the virus). Never mind that, per the C.D.C., the daily case rates in urban and nonmetropolitan areas closely track one another.

But 4StateNews, which covers Kansas, didn’t apologize for an August 8, 2021, headline that spread the news about “Night of the Spreadnecks.”

How accepted is spreadneck? It would have been poetic to find it on Spreadshirt, but I had to make do with RedBubble. 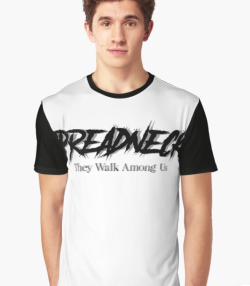 “Spreadnecks: They Walk Among Us.” (“For the rednecks who refuse to get a vaccine ...”) T-shirt via RiverCity Tees.

Have you spotted any new coronacoinages lately?

Posted at 06:45 AM in Coronavirus, Neologisms, Portmanteaus, Word of the Week | Permalink