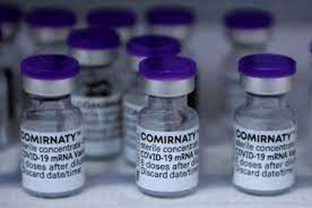 The goal in naming drugs is to overlap ideas and layer meaning into a name, he said. In this case, the high-priority concepts the teams started with were COVID immunization and the mRNA technology. The clients themselves came up with community as an image and association they wanted to elicit, Piergrossi said.

“Identifying those word parts and plugging into the community concept really executed nicely at the end of the day,” Piergrossi said.

“Executed nicely” is … a stretch. That’s a lot of concepts stuffed, à la turducken, into an awkward portmanteau that requires a pronunciation guide (The FDA suggests koe mir' na tee, with the stress on the second syllable. Yes, I am aware this is not a true phonetic representation.) Even with the guide, people are likely to stumble over the name.

Except for the co- prefix, which can suggest coronavirus or “together,” the name’s various elements are not transparent. What’s more, -aty is much less familiar a suffix than -ity. And in some sans-serif typefaces, Comirnaty looks like “Comimaty.”

For contrast, consider the name, also created by Brand Institute, of another COVID vaccine: Spikevax.

Spikevax—to date, the name is being used only in Europe—is made by Moderna, one of Pfizer’s competitors. (Moderna, by the way, is a good portmanteau: it’s constructed from modified and mRNA and looks, well, modern.) Whereas Comirnaty is a Franken-name, Spikevax consists of two recognizable parts. It’s fun to say and it gets your attention, because spike is not a neutral word. It can be negative (to spike a fever, to tear your skin on a spike) or positive (a football player may spike the ball in celebration after scoring a touchdown; a spike in volleyball is an unreturnable offensive move). Spike can be a nickname (Spike Lee, Spize Jonze, William “Spike” Pratt in Buffy the Vampire Slayer, the bounty hunter Spike Spiegel in the forthcoming Netflix anime series Cowboy Bebop).

Feels hostile, which is good as a weapon in your arsenal. Think of US missiles like Stinger or Harpoon, things one would not want to be on the receiving end of.

Amy Reynaldo sees the positive side.

That seals it. I definitely want my third dose to be Spikevax! My first two were Corminaty. Comirnaty?

A Twitter follower with a private account pointed out some of Spikevax’s additional virtues: It's “tough and manly and cool,” and it “doesn't sound like science—it sounds like a bad ass.” All of those things are advantages in a society where some people call masks “face diapers” and don’t want to look like babies.

Here are some other things to keep in mind:

* Pharma naming is really, really hard. (I tried it once, and that was enough.) If you think you can do better, you are probably wrong.

* Just about everyone loves to hate new names.

* When you have a large number of people who distrust science and authorities, a name that sounds like it was created by science-authority brain geniuses (that’s Comirnaty) is going to be viewed with skepticism and even hostility.

* Neither Comirnaty nor Spikevax will catch on unless they’re supported by massive PR and advertising campaigns. Will that happen? I don’t know.

And it'll just continue to be called the pfizer vaccine by everyone because ain't no one got time for that name.

* Names that sound like they were created by committee (which is, alas, too many names) are never as successful as names with a strongly distinctive personality.

And finally: If full approval of Comirnaty means more people will get vaccinated, hooray for Comirnaty.

Watch a seven-minute video from the New York Times about people who are “dying in the name of vaccine freedom.”

Posted at 11:56 AM in Coronavirus, Names in the News, Naming, Pharmaceutical, Portmanteaus | Permalink

With all the anti-vax hysteria and misinformation, maybe not a good idea to invite puns on "coma."

"Comirnaty" just looks to me like an OCR error resulting from bad kerning (aka keming).

Having named several Rx products I appreciate the degree of difficulty of the exercise. Nevertheless, Comirnaty is trying too hard and don’t get me started on Spikemax. Both are terrible attempts at branding. Consumers will continue to call them the Moderna and Pfizer vaccines.