« Word of the week: Celebrity | Main | Mascots in the news » 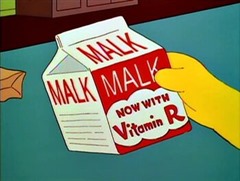 The first one I learned about was Not Milk. It’s produced by a Chilean company, NotCo, and it began appearing in U.S. Whole Foods stores in November 2020. I learned about it from a tweet from New York–based linguist Lisa Davidson.

The Chilean Not Milk has a headline-grabbing story: It was created, The Wall Street Journal reported last year, using artificial intelligence and machine learning:

NotCo’s machine learning tool, which it calls Giuseppe, taps into the company databases of thousands of plants and plant-based ingredients. By analyzing the molecules in the food, it learns which combinations make, say, cow’s milk and then generates formulas to match. … After Giuseppe develops an initial formula, a group of NotCo food scientists and chefs create prototypes. Humans test them for flavor, texture and appearance, among other traits. They provide feedback to the system, such as “less sugar,” and the machine learning continues to refine the recipes.

I haven’t figured out the significance of the ™ in Not Milk’s logo. I found no record of the brand in the USPTO database. 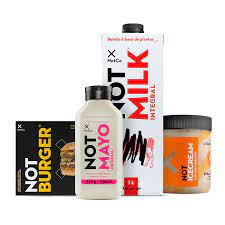 NotCo makes other Not products besides Not Milk.

Then there’s Shh … This Is Not MLK, which OrenH spotted in a Jerusalem supermarket.

In a follow-up tweet, Oren wrote: “Hey, if I were asked to bring back something that's not milk from the supermarket, I would let my imagination run wild... Dish soap? Cheese grater? Espresso capsules? All qualify.”

Linguist Joshua Raclaw quipped that it was “the milk that dare not speak its name,” and added:

They had so many options pic.twitter.com/Wqot2lz1Vy

This Not MLK is made by a Belgian company, Alpro. (No, not the dog-food company Alpo.) According to a June 2021 story in Retail Detail, a European trade publication, Alpro’s dairy alternatives are made from oats and pea protein: “Just like actual milk, they come in both full and semi-skimmed versions and can be used in the same way: in a cup of coffee, with breakfast cereals, straight in a glass, etc.”

Finally, there’s NotMilk (one word), the only not-milk with a registered U.S. trademark (since 2016). This not-milk is made in Brooklyn from nuts and seeds, so I suppose you could call it a Nut Not Milk.

One more lactose-negative name: Unmilk, a German company with a very cool logo (I would wear one of their T-shirts!) and a tagline that’s ambiguous in the best way: “No Milk Is Better.” Yes, ambiguity can be a virtue. 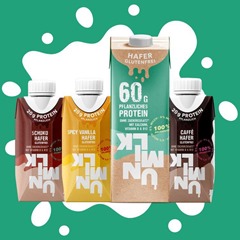 Posted at 07:00 AM in Food and Drink, Naming, Negative, Redundancy, Simpsons | Permalink

"Malk" could also be a reference to this classic internet video (fair warning—it kind of goes off the rails around the halfway point): https://www.youtube.com/watch?v=ty62YzGryU4&ab_channel=JulianSmith

There's also been a picture of something called "Pilk" going around the internet (allegedly a drink made from pickles, available in both dill and bread and butter flavors), though I'm convinced it's a hoax because there are no other images of it and no reference to the brand anywhere else that I can find. https://imgur.com/t/pickle/nZUHxc8

Just saw Mylk in a supermarket and experienced a full-body cringe.

Ripple was a fortified, highly-flavoured Gallo-brand wine popular in the '60s- -70s and known as either a dirt cheap way to get really drunk, or "girly wine". You could buy a bottle of Pagan Pink Ripple for a buck. Guess the pea-milk people thought those who hauled it to rock concerts would be dead from it by now.

Way back when, when dinosaurs still walked the earth, 7-Up ran TV commercials declaring their beverage "The Un-Cola." In one that I remember, actor Geoffrey Holder held a couple of dark nuts in his hand and said, "These are kola nuts." Then he extended his hand holding a lemon and a lime and declared, "These are Un-Cola nuts." Clever!

Vasiliy: I wrote about Uncola and other Un- brands:
https://nancyfriedman.typepad.com/away_with_words/2012/06/thats-un-possible.html

I thought about "Schmilk", as in, "Milk, schmilk—who cares?" Did a Google search—found "Schmilk, the world's first premium vegan milk chocolate."
I submit, "Schpilk, the Un-Zoloft", a high energy, non-dairy beverage." [from Yiddish, Schpilkes, meaning agitation, or anxiety]

'Then there are the dairy alternatives that tell you only what they aren’t: Not Milk, NotMilk, and “Shh … This Is Not MLK,” with a white droplet replacing the I in milk, to ensure that you don’t confuse it with not–Martin Luther King Jr.'