The nationwide electric-vehicle-charging company EVgo bestows names on each of its charging stations. Some names are generated internally, others come from customer contests.

Following an acquisition, Nestlé Waters has been renamed BlueTriton. The Catchword blog analyzes the reasons for the change and concludes that “as a company name it’s on message but meh.”

If you write historical fiction, or think you might like to try, check out “Joanna Bourne’s Useful Bibliography for Writing Historical Language Especially of the English Regency.” Bourne is herself a writer of historical fiction set in Revolutionary and Napoleonic France and Regency England. (via a tweet from Lynne Murphy—thanks, Lynne!that I can no longer find, halp!)

“Historically, ilk did not mean ‘type’ or ‘group’ or ‘family’. It came from Old English ilca, which in turn drew on the same root as gave us like, and it meant ‘same’” (Sesquiotic)

The hand gestures that last longer than spoken language—and how emoji are replicating them.  (William Park for BBC)

“Stupid” doesn’t mean unintelligent or even uninformed. The political philosopher Eric Voegelin was closer to the mark when he defined stupidity as a “loss of reality.” It’s possible to take Voegelin’s definition a step further and say that stupidity is a denial of reality to the degree that one’s own survival, to say nothing of the survival of others, is imperiled. “Too dumb to live,” we might say, summoning metaphors of dodo birds and dinosaurs, creatures who may not have been especially unintelligent but who owe their reputations as lamebrains in large part to their extinction. Stupidity is oblivious to negative consequences; it falls into a pit. Gross stupidity invites negative consequences; it looks for a pit. There’s an element of willfulness to it: let the oceans rise, let the virus rage, you can’t scare me. 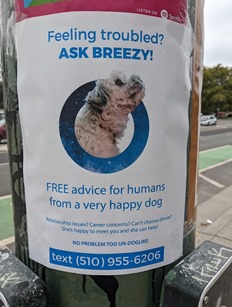 Free therapy from a dog named Breezy? Sounds good to me. (Spotted in my Oakland neighborhood.)

A paean to common names. Mine—first and last—are really common, and I appreciated this. (Namerology)

“No, that’s okay. That’s all right. You got your freedoms … But [the vaccine] is working. But you do have your freedoms you have to keep. You have to maintain that.” – Guess Who. So what’s up with that plural freedoms? And how about evidences? I derived many learnings from this post by PZ Myers. (Freethought Blogs; h/t Dan F.) 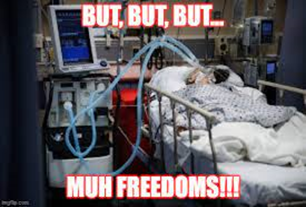 A typical “Muh Freedoms” meme for the pandemic era. “My” is spelled “muh” in memes “to portray someone as ignorant or just to sound cute and silly.”

Here’s a tougher-than-you’d-think quiz: Enter ten words that are as different from each other as possible, in all meanings and uses. Then see how you compare to the other test-takers. (Divergent Association Task)