Word of the week: SPAC

It’s been quite a year, so far, for novel acronyms and initialisms: NIL, NFT, XBE, TFG. (And let’s not forget LFG, from late 2019, which is now the title of a documentary, released in June 2021, about the US women’s national soccer team.)

Now we have the next BFD of acronyms: SPAC. It rhymes with crack and it stands for “special purpose acquisition company.”

Nasdaq defines SPACs as “publicly-traded investment vehicles that raise funds via an initial public offering (IPO) in order to complete a targeted acquisition.” According to their proponents, SPACs give ordinary investors, as opposed to fat cats, a way to buy into promising startups. But SPACs are also known as “blank check companies,” which gives you a hint of some of the skepticism surrounding them. 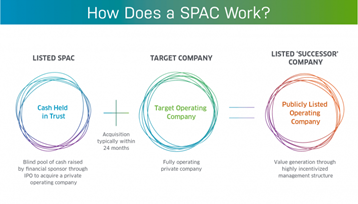 “How Does a SPAC Work?” via Nasdaq

In his profile of Chamath Palihapitiya, “The Pied Piper of SPACs,” for the June 7, 2021, issue of the New Yorker, Charles Duhigg called SPACs “among the fastest-growing financial instruments in the world.” Here’s how Duhigg explained them:

A SPAC takes a company public by attempting to sidestep regulations that help protect investors from potentially dodgy new businesses. People place money in a “blank check” fund, which then merges with an existing private company, allowing it to sell shares without having a formal initial public offering, a process that involves rigorous scrutiny by banks and regulators.

Or as Michael Hiltzik put it in his March 2, 2021, column in the Los Angeles Times: “SPACs raise money, typically by the hundreds of millions, for pools that promise only to merge with another company sometime in the near future.” Because of their structure, they evade heavy scrutiny by regulators. This is the sort of thing that can give the old expression “a pig in a poke” a whole new lease on life. As Hiltzik tartly observed: “Whenever a craze metastasizes from Wall Street into the outside world, the smart policy is to run away.”

This concept isn’t new: the first SPAC was created in 1993 by the investment bank GKS as an alternative to conventional IPOs. But in the last year or so SPACs have exploded in popularity (or notoriety, depending on your perspective). In 2020, according to Hiltzik, 248 SPACs raised $83.4 billion. In just the first two months of 2021, 204 new SPACs raised $65.4 billion.

And the headlines keep coming. Last week, electric-vehicle startup Lucid Motors merged with a SPAC called Churchill Capital IV; it debuted today on Nasdaq as LCID. Also last week, a SPAC backed by investor-slash-TFG-crony Tom Barrack, who is under indictment for illegal foreign lobbying, withdrew its plans for a public offering.

Some SPACs appear to be propelled by the charisma, or hype, or sheer ballsiness, of their founders. That appears to be the case with Chamath Palihapitiya, the billionaire SPAC-promoter who—like many celebrities—is known by only his first name. Charles Duhigg quotes one source who told him, “People either love Chamath or they hate him, and that’s fantastic, because polarization gets attention. … Polarization gets you on CNBC, it gets you Twitter followers, it gets you a megaphone. If you believe that Chamath can get an hour on CNBC to explain Virgin Galactic, then you want to buy into this deal, because attention is money.”

To which Duhigg adds: “Having a great story, and knowing how to tell it, can be a quick way to get rich. Which is exactly how capitalism, at certain moments, is supposed to work.”

Posted at 06:30 AM in Acronyms, Finance, Word of the Week | Permalink

“Having a great story, and knowing how to tell it, can be a quick way to get rich. Which is exactly how capitalism, at certain moments, is supposed to work.”

Beg to differ. Those and similar get-rich-quick schemes are what critics of capitalism describe as rent seeking, extracting money while creating no real value. SPAC may be a cute new word; but as an old concept it's about as cute as a gorging vulture.