« Identifying your brand's personality | Main | On the Visual Thesaurus: Plus signs everywhere »

The concept of name/image/likeness rights has been around for many years, if not always known by the NIL acronym. According to a 2019 article on sports image rights published on the World Intellectual Property Organization (WIPO) website, “the iconic 1970s English soccer player Kevin Keegan was the first sports personality to enter actively into what was known at the time as a ‘face contract’ for what were essentially his image rights.” In 2008, the estate of martial artist and film star Bruce Lee—dead since 1973—”signed with a company called GreenLight to negotiate the Bruce Lee ‘personality rights’ — his name, image, likeness and signature,” the New York Times reported in 2009.

You may be wondering, as I was, about the distinction between “image” and “likeness.” To you and me they may seem like synonyms, but to lawyers an “image” is a photo or other realistic representation, while “likeness” is interpreted more broadly. Here’s how Alexandra J. Roberts, a professor of trademark and entertainment law at the University of New Hampshire, replied to my Twitter request for clarification: 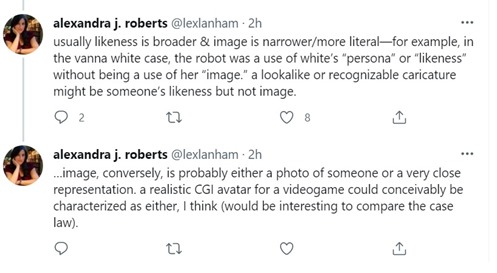 And here’s a reply from Zach Scott Gainous, a sports and entertainment lawyer in Nashville:

Likeness can include things that an athlete may be known for or an identifiable trait of the athlete, an athlete's jersey number, stats, height, awards or championships won, etc.

One of the more interesting consequences of the NIL changes, writes logo-trend expert James I. Bowie, “is the sudden appearance of personal logos for dozens of college athletes, who have taken to social media to show off their new symbols.” Some colleges, Bowie writes, aren’t waiting for the athletes to create their own logos; they’re using personalized logos as a recruitment tool:

Ironically, this outpouring of graphic embellishments adheres in a way to the NCAA’s vision for college sports; that is to say, a number of these logos look amateurish. Too often, for example, they have an excessive number of graphic elements crammed in, or proportions that are out of whack.

Judge for yourself: You can see 15 of those student-athlete logos at the link to Bowie’s story.

Posted at 06:00 AM in Acronyms, Design, Law, Sports, Word of the Week | Permalink