« On the Visual Thesaurus: Plus signs everywhere | Main | Why I'm not answering your Quora A2A » A confession: This post is really an excuse to write about See’s, which opened its first candy shop on North Western Avenue in Los Angeles in November 1921, when Western pretty much marked that city’s western frontier. There now are See’s shops across the U.S., but See’s is still very much a beloved California institution—headquartered now in South San Francisco—that has stayed remarkably true to its roots while continuously innovating.

See’s—full name “See’s Famous Old Time Candies”—was founded by Charles See, a Canadian chocolate salesman who had moved to Los Angeles. But it was Charles’s widowed mother, the saintly-looking Mary See (1854–1939) who developed the original candy recipes and became the company’s face, a sort of Whistler’s Mother of the confectionery industry. 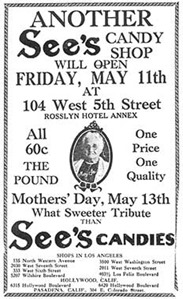 A 1925 ad for “another See’s candy shop,” featuring the portrait of Mary See that still adorns boxes. Does anyone know when we started saying “60 cents a pound” instead of “60 cents the pound”?*

See’s longtime motto is “Quality Without Compromise,” which is true if blandly generic. For the 100-year celebration, though, See’s introduced a new motto that’s nothing short of delightful: “Made to Not Last.” 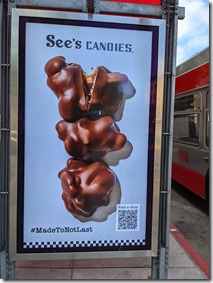 There are people who will tell you never to use a negative word like not in your tagline or other branding language. I’m here to tell you that like most generalizations, this one is sometimes wrong. I’ve written previously about why negative language can be the right choice for a brand. “Made to Not Last”—like the old Lay’s potato chip slogan “Bet You Can’t Eat One”**—is one of those right choices. In just four one-syllable words, it says “delicious” without saying “delicious”; it promises the ultimate in candy satisfaction: an empty box.

Here’s a short See’s video that cleverly illustrates “Made to Not Last.”

I’ve come across a couple other negative-but-positive taglines lately: Hinge is using “The Dating App Designed to Be Deleted”—i.e., you’ll meet your true love and never need to search again—and Dolan, a San Francisco personal-injury law firm, has “The Best Lawyers We Hope You’ll Never Need.” But as far as I can tell, no one’s doing it as economically as See’s.

When will she get around to lollipop, you’re wondering. Here you go: The OED’s earliest citation (as lolly-pop) is from a 1784 publication called the London Chronicle (“She confessed that a certain person … had given her sweetmeats, called lolly-pops”). The word is “of obscure formation,” but we’re invited to compare the Northern England dialect word lolly, which means “tongue.” Is that meaning of lolly related to the verb to loll (to droop, to relax, as in “a lolling tongue”)? Nope, says the OED: the verb is probably onomatopoetic.

A lollipop can also be “a circular sign held up to stop traffic so that children may cross the road”; this usage originated in late-1960s Australia. The person who holds up the sign is a lollipop man or lollipop woman.

Happy Lollipop Day! If you find yourself near a See’s shop on July 20, stop in for a free sample in any of an assortment of flavors, including Cafe Latte, Butterscotch, Cinnamon, and Vanilla. I won’t say no to a See’s lollypop, but my personal longstanding allegiance is to See’s Nuts & Chews. Bet you can’t eat one.

** Yes, that was the original wording in the commercial starring Bert Lahr. Lay’s later changed it to “Bet You Can’t Eat Just One,” which assumed its audience needed to have the joke spelled out. Which may have been true.

Posted at 07:00 AM in Food and Drink, Holidays, Slogans and Taglines, Word of the Week | Permalink

My son didn't understand why lollipops were called "suckers." "You don't suck them," he said, "You lick them. They should be called "lick-ers." And, yes, he loudly demanded a "lick-er" in the grocery store. Even at 3-years-old, I think he knew it was funny.

Crossing guards in the U.K. are called "lollypop ladies" – because the stop signs they hold resemble lollypops.

As a copywriter for the big toy company, I worked on the See's Barbie® dolls. We re-created a mini store counter for the package.