Highly Irregular, by Arika Okrent, looks at many of the things that make English such a weird language, some of which may be so familiar you’ve never questioned them. Why isn’t of spelled with a v? How come we say how come? Why do we say big spender and large pizza, but not large spender and big pizza? Why can we say How dare you! but not How try you? Okrent is a linguist who has contributed for many years to Mental Floss, and she wears her erudition lightly, making this book equally well suited to high school students, English learners, people who want to win bar bets, and anyone interested in the way we speak and write. (One chapter of Highly Irregular is titled “Blame the Printing Press”: Words like ghost, Okrent tells us, had no h until a bunch of 16th-century Flemish typesetters had their way with them.) The book’s witty illustrations are by Okrent’s frequent Mental Floss collaborator, the illustrator Sean O’Neill. For a preview of the book, see this video conversation between Okrent and New York Times Wordplay senior editor Deb Amlen. 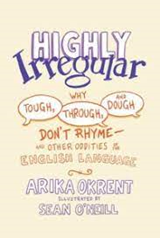 I received a review copy of Highly Irregular from the publisher, Oxford University Press.

I did not receive a review copy of John H. McWhorter’s new book, Nine Nasty Words, but that’s OK. (Still, if you’re listening, Penguin Random House…) As I’ve mentioned here more than once, I’m a contributor to Strong Language, the sweary blog about swearing, and I’m always looking for new takes on, as McWhorter puts it, “English in the gutter.” Also, I’ve long been a fan of McWhorter’s Lexicon Valley podcast—which has recently relocated from Slate to Booksmart Studios—so I reserved the audio version of Nine Nasty Words, narrated by McWhorter himself, on the free Libby app. (Thank you, public libraries!) McWhorter covers some familiar territory—no, fuck and shit are not acronyms—and unearths some historical gems, such as Lucille Bogan’s extremely bawdy blues recordings from the 1930s, which provide insights into how and when certain expletives were being, um, expleted. You’ll want to stick around to the end, where McWhorter, who is Black (or black, as he prefers), argues that our strongest taboo words are slurs rather than profanity. For a taste, see his New York Times op-ed, “How the N-Word Became Unsayable,” from earlier this year. 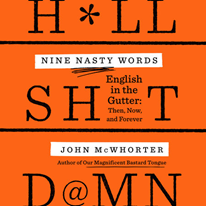 Speaking of taboo words that aren’t so taboo anymore: “A brief history of ‘fuck’ in the New York Times.” (Kurt Andersen)

And speaking of language podcasts, Slate has a new one: Spectacular Vernacular, co-hosted by linguist Nicole Holliday and Wall Street Journal language columnist Ben Zimmer. The first episode features an interview with John Linnell of They Might Be Giants.

What if all language is oppressive? (Douglas Rushkoff)

Barry Popik has been documenting the Covid word coinages (aka #coronawords and #coronacoinages) since the beginning of the pandemic. Two of his recent finds originated in the UK: jabby dodger or jabbydodger (a person who refuses the Covid jab, or vaccination); and pingdemic, an “epidemic” of “pings” on the phones of people who received self-isolation orders from the National Health Service.

Yep, I’m still doing the New York Times Spelling Bee (see my Visual Thesaurus column about the Bee, now out of paywall lockup). Now there’s a new way to hang out with other Bee people (and, OK, pick up a few tips and hints): the Spelling Bee Forum. Here’s an introduction and glossary; for the current day’s Bee, go to this landing page and scroll down to “Spelling Bee Forum.”

What do Void Equipment, Tentree, Barbell Armageddon, and Nonchalant have in common? They’re all brands of sweatpants, aka joggers. (Liam Humble)

This is wild: Turns out the invention of hold music was an accident. Not only that: There’s a whole website, Calls on Hold, devoted to hold music. (h/t Tina Tallon)

Maybe you read that story about the so-called Peppa Pig Effect: huge numbers of U.S. kids supposedly starting to talk like Brits because they’ve been binge-watching “Peppa Pig,” a British cartoon show, during the pandemic. Rubbish, says Lynne Murphy, an actual linguist specializing (and also specialising) in US/UK language differences who was not interviewed for the story. (Nor were any other linguists.) Read Lynne’s Twitter thread. Ben Yagoda also weighs in, on his Not One-Off Britishisms blog.

I’m on vacation so you’re getting this for free:
Starbucks, named (more or less) for the Melville character, has no apostrophe.
Neither does Borders, the defunct bookstore chain.
Same with Walgreens,despite being named for a guy named Walgreen.

I recently learned about hatejacking: “when a brand is hijacked in ways outside the control of the company and that imbues the brand with messaging that’s interpreted as hateful.” (Mike Pope)