In a launch video, actor Tom Hanks—an odd choice, since he’s a San Francisco Bay Area native—waxes rhapsodic about Cleveland in the first person plural: “We are a city on the rise … We are a city of fire and water … And this is our team.”

Together, we are all... pic.twitter.com/R5FnT4kv1I

The “Indians” name, and in particular the “Chief Wahoo” mascot and logo, had been criticized as racist for years by Native Americans and others. Neither was part of the team’s early history: The team was founded in 1900 as the Lake Shores, and went through multiple name changes (including being called, briefly, the Spiders), before setting on Indians in 1915. As I wrote in a 2014 post, “Chief Wahoo was created in 1947 by a 17-year-old draftsman, Walter Goldbach, who’d been commissioned to draw a mascot that ‘would convey a spirit of pure joy and unbridled enthusiasm.’” 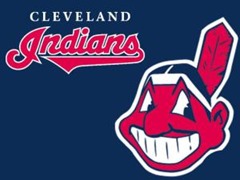 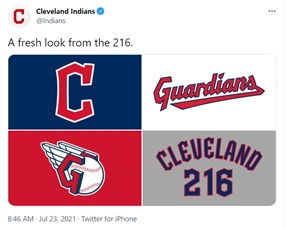 New logos. The one in the lower left quadrant incorporates wing elements from the Guardians of Traffic. 216 is the Cleveland area code. For more on area-code branding, see James I. Bowie: “How the Boring Area Code Became a Hot Branding Commodity.”

There were the predictable “Guardians of the Galaxy” jokes, and the predictable “I hate it because it’s new” reactions. (Remember: We are predisposed to hate new brand names until we don’t.) Predictably, TFG hates the name change, which may help you make up your own mind.

The former President says “Indians” are angry over the Cleveland ⁦@Indians⁩ name change. Perhaps he means people from India because Native American groups have been asking for this for years. pic.twitter.com/r7KqV2Otyq

Vincent Schilling, a Mohawk journalist who’s the associate editor of Indian Country Today, probably speaks for many Native Americans: “I am glad Cleveland has taken such a step.” 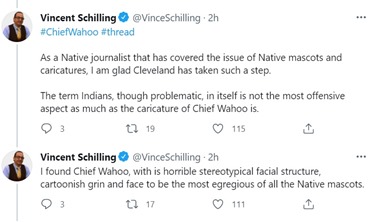 Read the rest of Schilling’s thread.

I like the new name and the local pride it evokes. Unlike names of hockey and football teams, baseball-team names don’t need to sound aggressive (hey, they are two MLB teams named after socks), and “Guardians” is both distinctive and memorable. It doesn’t hurt that it has the same three-syllable cadence as the previous name, or that both names end in -dians. I judge it an inside-the-park home run: a rare feat we should be cheering.

For local-landmark fans: “10 Things You Should Know About the Guardians of Traffic Statues, Since You Now Root for the Cleveland Guardians Baseball Team,” from the Cleveland Scene.

The 45th ex-President of the United States again demonstrates his separation from reality.

Really? What do we think Jared & Ivanka would say to him if the team were to rename themselves the "Cleveland Jews" (why not - Cleveland has a vibrant, long-standing Jewish community)? Would Lindsey Graham wax rhapsodic while golfing with The Former Guy had they chosen the "Cleveland Closet-Queens"?

So many possibilities to offend, so little time!

Predictably, Right-wingers are outraged. I suggest a name for them: The White-Privilege Victims