I might not have thought to mark the occasion if Lynne Murphy, the proprietress of Separated by a Common Language, hadn’t commemorated her own excellent blog’s Sweet Fifteenth less than two weeks ago. ¡Saludos y felicitaciones, blog-twin Lynne!

According to people who care about such things, the traditional 15th-anniversary gift is something made of crystal. I don’t need any faceted glass, so instead I’ll tell you about quinceañera, the traditional 15th-birthday celebration for girls in Mexico, Latin America, the Caribbean, and Spanish-speaking communities in the US and elsewhere. The word is a blend of quince (fifteen) and años (years, and be sure to include the tilde; otherwise you’re talking about anuses), and the feminine noun ending -era. According to a Britannica entry, the celebration—sometimes shortened to quince—marks the “passage from girlhood to womanhood; the term is also used for the celebrant herself.” 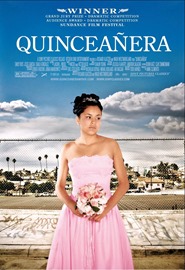 Poster for Quinceañera (2006, later retitled Echo Park LA). From IMdB: “Magdalena is 14 and anxiously awaiting her 15th birthday where she'll celebrate her quinceañera. Her world starts to crumble when she discovers her pregnancy after not being able to fit in her gown for her quinceañera. Soon, she's kicked out of her home, abandoned by her family, and abandoned by her baby's father. Magdalena is then taken in by her great-granduncle, Tomas and her gay, often-in-trouble cousin, Carlos. There she finds a new family and life.”

I have often wondered why, in Spanish, five is cinco and fifty is cincuenta—with initial C—but fifteen is quince and five hundred is quinientos, with initial Q. The Latin origins of those five-ish words all start with Q (five is quinque). Maybe a Spanish-etymology expert will read this and five-splain me. [UPDATE: See Alon’s comment, below.]

While I’m fluffing up my twirly pink dress for the party, please enjoy some highlights of the last twelve months of bloggage:

January 2021: Who needs vwls? (The Visual Thesaurus column to which I link is no longer paywalled, hurrah)

For a while I celebrated my bloggiversary every year:

But now, I’m off to the dance. ¡Hasta luego, amig@s! And many thanks for reading, for commenting, for keeping me on my toes, and for not being measly.

Posted at 06:00 AM in Bloggiversary, Retrospective, Spanish, Word of the Week | Permalink

"I’ve outlasted The Former Guy by many, many Scaramuccis." Yes. You have words. Yet, former guy doesn't need them to persist.

I have often wondered why, in Spanish, five is cinco and fifty is cincuenta—with initial C—but fifteen is quince and five hundred is quinientos, with initial Q. The Latin origins of those five-ish words all start with Q (five is quinque). Maybe a Spanish-etymology expert will read this and five-splain me.

IANAE, but I can help with that, and it goes beyond Spanish all the way to Vulgar Latin, which didn't like the repeated /kʷ/ in quinque and had turned it into cinque /ˈkin.kʷe/. That's why you also have French cinq, Italian cinque, Romanian cinci, etc.

The same happened to quinquaginta (which gave cinquaginta and eventually cincuenta) but not to quintus, quincedim or quingenti, who kept their initial labialisation.

This seems to have been just a more advanced stage of a process that was already happening in Classical Latin, which had turned pre-Classical *quoquo ‘to cook’ into coquo.

Thanks, Susan! Thanks, Alon!