« Name in the news: Phexxi | Main | On the Visual Thesaurus: Electric-vehicle lingo »

Word of the week: Peccy

I thought I knew quite a bit about Amazon. I have, after all, been a customer since September 1997. (My first order: The Cynic’s Dictionary and Idiom Savant: Slang as It Is Slung.) I’ve written about the company and its brands (see here and here, for example). I’ve read two books about the company: Alec MacGillis’s Fulfillment: Winning and Losing in One-Click America (2021) and Brad Stone’s The Everything Store: Jeff Bezos and the Age of Amazon (2014)*.

But I’ve never worked for Amazon, which may explain my not knowing that the company had a mascot called Peccy.

I learned about Peccy in an article by Daniel Brook in the July 2021 issue of Harper’s about the (ultimately failed) campaign to unionize the workers at an Amazon warehouse in Bessemer, Alabama. (Link; article may be paywalled.) 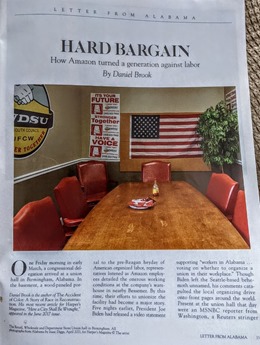 The central figure in Brook’s article is 23-year-old Carrington Byers, one of 5,876 employees at the Bessemer warehouse. The story begins at a pro-union event at a Bessemer union hall in early March 2021. Byers has shown up, even though he is “skeptical of the unionization effort”:

As was the custom at the warehouse, Carrington had decorated his lanyard with an array of pins depicting the company’s mascot, Peccy—a neckless orange creature with an Amazon smile for a mouth. (His name derives from management’s insistence that “Amazonians” are proudly “peculiar” individuals.) Carrington still hoped to snag the rainbow gay-pride Peccy and the Black History Month Peccy, which sported an Afro. 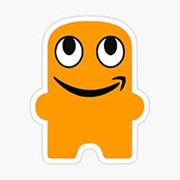 I want to talk about peculiar’s peculiar history, but first I need to acknowledge that the Peccy story wasn’t exactly a secret. If I’d been paying closer attention, I would have spotted an April 2019 article by Harry McCracken in Fast Company, “Meet Peccy, the Bizarre, Beloved Mascot You Didn’t Know Amazon Had.” McCracken doesn’t tell us who created Peccy, or when, but he does offer some insights into Peccy’s range and influence. The pins, for example:

There are ones depicting Peccy as Superman, Wonder Woman, Harry Potter, Chewbacca, Sherlock Holmes, a ninja, both Mickey and Minnie Mouse, Mr. T, Richard Simmons, and multiple Game of Thrones characters, just to share a few examples that recipients have posted to the web. Some of these pins are given to employees for achievements such as perfect attendance—a feat more conscientious than peculiar, and evidence that Peccy is, as much as anything, an adorable manifestation of warm, fuzzy feelings about Amazon.

Or not so warm and fuzzy, in the case of the FACE of Amazon Twitter account—FACE stands for Former and Current Employees—which retweets negative items about working conditions at the company. The account’s avatar is Peccy with a frown and a black eye.

Just how peculiar is Amazon? The company is fond of enumerating its “Peculiar Ways.” 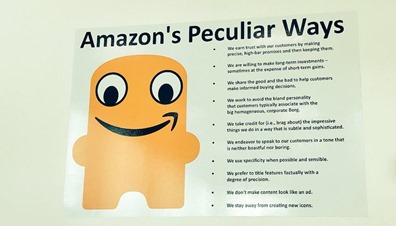 Via Twitter. Click to embiggen. In his 2019 article, Harry McCracken wrote: “I’m still trying to figure out why one Peculiar Way is unabashedly pro-bragging while the next maintains that the company tries to avoid a boastful tone.”

Since the early 1600s, peculiar has meant “strange” or “odd,” but that’s not how it started its long life. Latin pecūliāris meant “personal” or “private”; its root, pecū, meant “a herd of livestock”—especially cows, a primary source of wealth in the ancient world. Peculium was imported directly into English and meant “private property.” A close relative of peculiar is pecuniary, which has retained its original sense of “related to money.” Also related: pecunious (wealthy) and the more-frequently-encountered impecunious (destitute). There’s also a verb, peculate, that means “to embezzle” or “to pilfer.”

The peculiar institution is the 19th-century euphemism for slavery in the United States. The earliest citation in the OED is from an 1829 article in the Carolina Observer: “South Carolina, from her climate, situation, and peculiar institutions, is and must forever continue to be, wholly dependent upon agriculture and commerce.”

Is pecunious Amazon a 21st-century peculiar institution? Some people would say so.

(Not related to peculiar despite superficial resemblances: impeccable and peccadillo(from peccare, to sin), pectoral (which originally meant “breastplate”), peck (from pick, which has Old English roots), and peccary (from the Carib word for a piglike mammal).

You can find many enamel Peccy pins on eBay and other resale sites, where it’s fair to assume Amazon employees or ex-employees are offloading them. Expect to pay $12 to $30 apiece. 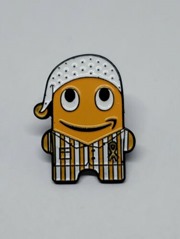 Peccy in PJs for Childhood Cancer Awareness, via eBay. 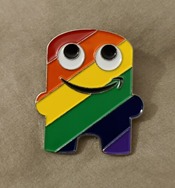 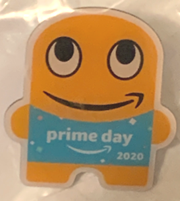 Another term I learned from Daniel Brook’s article in the Atlantic is bossware, also known as tattleware: software that monitors employees on the warehouse floor, the office, or even at home. I couldn’t find bossware or tattleware in any online dictionary (even Urban Dictionary), but I did see a number of articles about it dating from the first quarter of 2020—the early days of the COVID pandemic, when many white-collar workers began working from home. “The smartest approach is to act as if your communications may be monitored,” advised a February 2020 New York Times Wirecutter column. The Electronic Frontier Foundation was blunter: “While aimed at helping employers, bossware puts workers’ privacy and security at risk by logging every click and keystroke,” an EFF publication warned in June 2020, “covertly gathering information for lawsuits, and using other spying features that go far beyond what is necessary and proportionate to manage a workforce.”

* Stone has a new book about Amazon, Amazon Unbound, published in May 2021.

Posted at 06:00 AM in Etymology, Mascot, Word of the Week | Permalink