On the Visual Thesaurus: Electric-vehicle lingo

My June column for the Visual Thesaurus looks at the brand names and specialized vocabulary of electric vehicles (EVs, BEVs, ZEVs, and their kin). As you may recall,  I’ve become a little obsessed with this subject ever since I researched and (finally) bought a PHEV—that’s a plug-in hybrid electric vehicle.

Full access to the column is paywalled for three months; here’s an excerpt:

Electric cars didn’t appear out of nowhere in the 21st century; in fact, they predate gasoline-powered cars by several decades. The first crude battery-operated carriage was built in the 1830s by Scottish inventor Robert Anderson, and the first U.S. patent for a rechargeable car was granted in 1894 to a pair of Philadelphia inventors who called their vehicle the Electrobat. 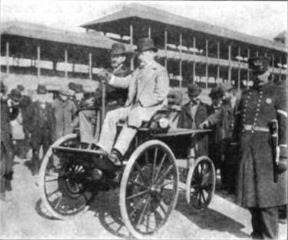 Over the decades that followed, electric-vehicle naming rarely surpassed the modest creativity of “Electrobat” (from electric and battery, although “bat out of hell” may have played a subliminal role). Then as now, many companies just tacked a modifier onto an existing brand name or generic term: Detroit Electric, Studebaker Electric, Electric Vehicle Company. Later EV model names borrowed from the vocabulary of electric power or created electrified portmanteaus: the Kilowatt (built in 1959 by the Henney company of Illinois), the Amitron (built by AMC and later renamed the Electron), Chevrolet’s Electrovair and Electrovette (echoing the Chevy Corvair and Corvette).

Read the rest of the column, which covers Tesla (the breakthrough brand), the E-names (Mach-E, e-Tron), the “pure” names (Lucid, Clarity, LEAF), the charging-station names (what’s up with CHAdeMO, anyway?), and more.

“Nobody’s gonna buy a car named Howard”: my 2013 post about the HBO original movie Clear History, whose plot centers on an electric car.

Posted at 07:01 AM in Cars and Motorcycles, Lingo, Visual Thesaurus | Permalink