« Word of the week: Cheugy | Main | On the Visual Thesaurus: Vax vocab »

Word of the week: Shecession

The economic downturn that followed the 2008 financial crisis became known as a mancession: a recession that disproportionately affected men. (I wrote about it in August 2009.) The COVID-19 recession, by contrast, is having a disproportionate impact on women, but no one’s calling it a womancession. 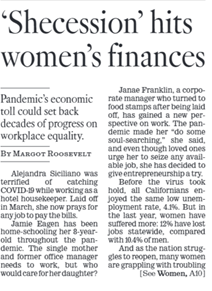 Shecession—a portmanteau that sounds confusingly close to “secession”—has been circulating for at least a year. The earliest usage I found was in a May 9, 2020, article in the New York Times, that quoted the head of a Washington think tank:

The scale of the crisis is unlike anything since the Great Depression. And for the first time in decades, this crisis has a predominantly nonwhite, female face.

“I think we should go ahead and call this a ‘shecession,’” said C. Nicole Mason, president and chief executive of the Institute for Women’s Policy Research, in a nod to the 2008 recession that came to be known as the “mancession” because more men were affected.

Women are more adversely affected, the article went on to say, because “the industries hardest hit by the pandemic — leisure, hospitality, education and even some parts of health care — are ‘disproportionately nonwhite and female,’ said Diane Lim, senior adviser for the Penn Wharton Budget Model, a nonpartisan research initiative.”

Before the virus took hold, all Californians enjoyed the same low unemployment rate, 4.1%. But in the last year, women have suffered more: 12% have lost jobs statewide, compared with 10.4% of men. 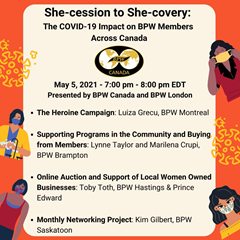 “She-cession to She-covery”: a series of webinars presented by BPW (Business and Professional Women) in Canada

Shecession wasn’t the only feminine portmanteau in the headlines last week. On May 6, Rep. Lauren Underwood (D-Illinois) said in testimony before the House Oversight and Reform Committee that she “is pushing for a comprehensive 12-bill package known as the ‘Momnibus’ to be included in President Joe Biden’s infrastructure legislation that focuses on services for families.” (Hat tip: Ben Zimmer.)

As we celebrate Mother’s Day, we must also commit to the work that needs to be done to end our nation's unacceptably high maternal mortality crisis. I've introduced the Black Maternal Health #Momnibus Act with @RepAdams and @SenBooker to save moms’ lives. https://t.co/pNuqJ5gLqk

Nicely timed for the week before Mother’s Day, “Momnibus” is also a seamless and clever blend of “mom” and “omnibus.” For another stab at an “omnibus” portmanteau, see my 2014 post about cromnibus.

Posted at 06:00 AM in Economy, Portmanteaus, Women, Word of the Week | Permalink