On the Visual Thesaurus: Vax vocab

Ever since the pandemic began in early 2020, I’ve kept track of the ways in which COVID-19 has influenced the way we talk and write. In my May column for the Visual Thesaurus I take a look at the latest corona-cabulary trend: vaccination words. From the names of pharmaceutical companies like Moderna—coined not from modern but from modified and RNA—to inventions like vaxhole and Fauci ouchie, we continue to make linguistic lemonade out of pandemic lemons.

Full access to the column is restricted to subscribers for three months; here’s a preview:

“Shot” or “jab”? “The rollout of Coronavirus vaccines in the past week in both the U.K. and the U.S. highlights the different common word used in each for an injection,” wrote Ben Yagoda in his “Not One-Off Britishisms” blog on December 16, 2020. “Here it’s ‘shot’; there it’s ‘jab.’” But that may be changing: A couple of weeks after Yagoda published his post, linguist Lynne Murphy proclaimed jab to be the UK-to-US import of the year. In recent months, American headlines have borne out the trend. 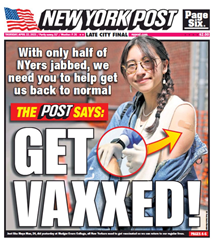 “Only half of NYers jabbed”: New York Post, April 22, 2021. Many of those New Yorkers got their shots in the Javits Center, named for the 20th-century US Senator Jacob Javits and now sometimes playfully referred to as the “Jabits” Center.

As it happens, both shot and jab, in the “injection” sense, have late-19th-century American origins, wrote Ben Zimmer in his “Word on the Street” column for the Wall Street Journal—and both originally referred to injections of narcotics. Jab didn’t reach the UK until World War II, according to Green’s Dictionary of Slang; that was when British troops (influenced by their Yankee counterparts?) began using it to refer to inoculations against diseases like tuberculosis.

Read the rest of “An Injection of New Vocabulary.” And leave a comment letting me know your favorite new COVID word! 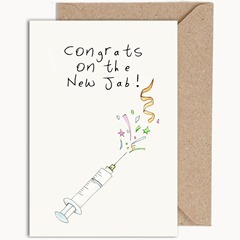 Americans no longer need an interpreter to understand this punny “Congrats on the New Jab” greeting card by Irish designer Weird Watercolours.