The initialism, terse and a little cryptic, was a perfect fit for social media and a neat counterpunch to MAGA. On Twitter, one of the first people to employ TFG was Pam Keith, a Democrat who ran unsuccessfully for Congress last year in Florida’s 18th District. 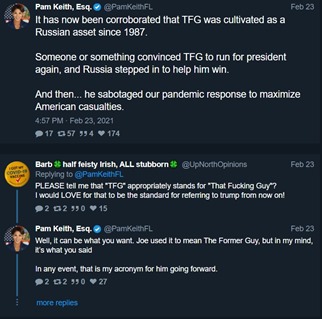 The “F” stands for “Former,” usually.

Lately, she’s been referring to Trump’s base as “TFGers.”

We do not hate white people.

We are just no longer willing to tolerate or put up with white people who hate everyone else.

It going to be important for you to understand the distinction, if you have any desire or hope of escaping social exile.

And it’s been spreading around.

LOL did you see TFG's Easter message this morning?

There can't be anyone alive that doesn't know that TFG is corrupt. I first learned it in the 80's.

Hitler. Charles Manson. Jim Jones. TFG. There will always be followers no matter how heinous or ridiculous the message.

Not everyone has gotten the memo, though. 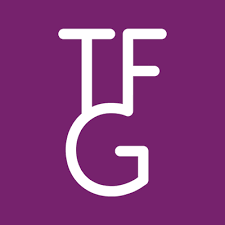 In Spain, “TFG” may stand for trabajo final de grado, the equivalent of “final degree project.”

At one point during my research I started fixating on the word former and where it came from. Our word meaning “earlier in time” is unrelated to form, which derives from Latin. Rather, it originated in Old English as the comparative of forme, which meant “first” or “earliest in time of order.” The Online Etymological Dictionary notes that the word is “probably patterned on formest (see foremost); it is an unusual case of a comparative formed from a superlative (the Old English –m is a superlative suffix).” Foremost, which now means “most prominent,” is not a compound of fore and most but an altered spelling of formest.

And have you ever wondered why the ordinal form of one is first and not something like oneth? It turns out to share an etymology with former. Fyrst was the Old English superlative of fore.

Posted at 06:00 AM in Acronyms, Current Affairs, Epithet, Etymology, Word of the Week | Permalink

"The Former Guy" reminds me of the quip penned for George Lazenby as the short-lived "new James Bond" in ON HER MAJESTY'S SECRET SERVICE: "This never happened to the other fellow."