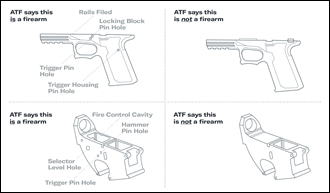 Ghost gun is a vivid way to describe what might otherwise be called a “kit gun” or a “DIY gun.” Unlike the latter terms, which suggest amateurish tinkering, ghost gun connotes invisibility, spookiness and, yes, death.

I was unable to find ghost gun in standard dictionaries. Wiktionary has an entry, though, with two definitions:

1. A gun without serial numbers, that cannot be easily tracked, especially a home-made gun built with non-registered, partially finished or 3D printed components.

2. A gun that is not detectable by standard gun detection measures, such as a gun without much metal thus unable to set off metal detectors.

Ghost gun has been in usage since at least 2014, when a company called Ghost Guns, which sells firearms kits for home assembly, registered its domain. The company applied for trademark protection of its name (which appears to have passed into generic use) in February 2021. 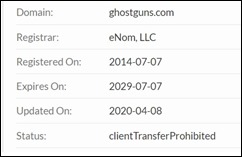 In June 2015, senior writer Andy Greenberg wrote a story for Wired headlined “I Made an Untraceable AR-15 ‘Ghost Gun’ in My Office—and It Was Easy.” The quotation marks around ghost gun suggest that it’s a novel coinage, but Greenberg doesn’t take credit for it: “It’s called a ‘ghost gun’—a term popularized by gun control advocates but increasingly adopted by gun lovers too—because it’s an untraceable semiautomatic rifle with no serial number, existing beyond law enforcement’s knowledge and control.”

Ghost has been modifying other words for centuries. (Ghost itself, which originally was a synonym for “spirit” or “soul,” goes back to Old English.) The poet Lord Byron is credited with coining ghost story around 1824. Ghost town, which the OED says is “originally US,” first appeared in the early 20th century. Ghost-writing, surprisingly, is even more recent, dating only to the 1920s. Ghost word was coined in 1886 by the British philologist Walter William Skeat to describe a word that exists only in dictionaries or “an apparent word or false form in a manuscript due to a blunder” and has “no meaning whatever.”

A new ghost emerged during the COVID pandemic. A ghost kitchen, Mike Pope wrote in February 2021, is “a commercial kitchen that’s set up in an industrial space somewhere. There’s no storefront, no dining area, no waitstaff, and of course no customers.” Ghost kitchens are also known as dark kitchens, virtual brands, and delivery-only concepts; in November 2020, Eater called them “the wave of the future” for food service.

And one old ghost—exactly how old I haven’t been able to determine—has taken on new significance during the pandemic. Ghost light is theatrical jargon for the single light left burning on a stage after the audience, cast, and crew have gone home: According to superstition, if the empty theater is left completely dark a ghost will take up residence. (Alternate versions hold that ghost lights appease resident ghosts.) When theaters all of the world were forced to close in March 2020, many of them revived what had become a lapsed tradition, and some even staged special virtual events with “ghost light” themes.

Posted at 06:00 AM in Government, Guns, Politics, Word of the Week | Permalink

The fact that these things exist - let alone that they are so common as to have a name - is one more indication I've lived too long, seen too much.

Couldn't we have just stopped at "ghost peppers"?