« Word of the week: Ghost gun | Main | On the Visual Thesaurus: The Hidden History of Coined Words »

The name was instantly mocked, as is to be expected with such announcements. The Verge called the name “wacky” and “wholly bizarre.” CNN Business called it “questionable,” “a portmanteau whose meaning and pronunciation aren’t immediately clear.”

There is a grand tradition of such mockery, mostly on the part of people who have little experience with, or understanding of, corporate name development. Do you remember which big corporate name Time magazine ridiculed in 2000 as “generic corporate nonsense”? That would be Accenture, which has managed to shake off that stinging rebuke quite nicely, thank you. Do you remember the uproar in 2009 when the Sci Fi Channel changed its name to—horrors!—Syfy? Probably not. Do you recall the hullaballoo over Hulu, which means “cease and desist” in Swahili, for heaven’s sake?

did you all see the @ibm announcement?? pic.twitter.com/O3DAIXnix4

(Here’s the original meme from 2012, in which the circled baby name is “Lakynn.”)

Kyndryl: a character name in World of Warcraft

But enough kidding, or kydding, around. What do I think of Kyndryl as a technology name?

I’ve been naming companies and products for 25 years, and I’m having a hard time making a case for Kyndryl, even when—especially when—I read IBM’s explanation for the name. Here’s a direct quote from the press release:

“Kyn” is derived from the word kinship, referencing the belief that relationships with people -- employees, customers and partners -- are at the center of the strategy, and that long-lasting relationships must be built and nurtured. “Dryl” comes from tendril, bringing to mind new growth and the idea that -- together with customers and partners -- the business is always working toward advancing human progress.

Speaking, as we were, of corporate nonsense. Are your eyes rolling yet?

If I squint, I may be able to see “kinship” in “kyn,” although what family has to do with infrastructure services remains a mystery to me. Dryl, on the other hand, does not evoke tendril, a relatively obscure word in any case. No, what -dryl suggests is either drilling or antihistamines. 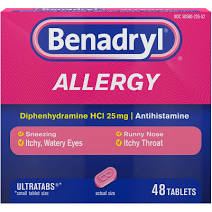 Not just Benadryl but also private-label versions like Q-Dryl, M-Dryl, and Walmart’s Wal-Dryl.

The -dryl in Benadryl and its clones comes from the drug’s chemical name: beta-dimethylaminoethylbenzhydryl ether hydrochloride; the Ben- prefix suggests “beneficial.” The compound, whose generic name is diphenhydramine, was first made in 1946 by George Rieveschl, who also came up with the Benadryl name. It’s an unusual instance of an inventor successfully naming his invention. 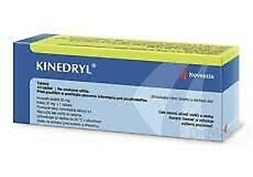 Kinedryl, an over-the-counter remedy for motion sickness sold in Slovakia. The Kine- prefix suggests “motion,” as in “kinetic.”

Did the consultants who proposed Kyndryl—I am sure there were consultants, and that they were paid handsomely—know about -dryl’s pharmaceutical overtones? I can almost guarantee that they did. They ignored them, possibly figuring that IBM’s clout would overcome the confusion. To be fair, it’s a strategy that can sometimes work, especially with common, non-coined words: Dove chocolate and Dove soap, after all, coexist peacefully in supermarkets. “Magnum” shows up in a wide range of brand names.

But -dryl? It’s too specific, too arcane, and too unintuitively spelled, to be plucked out of its long-running context without carrying some heavy baggage.

The double-Y spelling of Kyndryl is another problem. As Sallie Goetsch, one of my Twitter followers, accurately put it, it’s “excessively twee.” The short-i pronunciation signals our brains to think lightweight and insubstantial, not what we’d expect from a technology powerhouse.

And the initial K? As Mel Brooks once said—and he should know—K is the funniest sound in the English language. Great for stand-up—Cucamonga! Cowabunga!—not so good for big, serious infrastructure.

I’ve reflected, I’ve considered, I’ve pondered. And I’ve decided: Kyndryl is a bad name that isn’t up to the job it was hired to do.

Is there no hope? There’s always hope. Tronc, a truly terrible name, is no more. Mondelēz mostly lurks quietly in the background, away from consumers’ eyes.

There probably were people—not all of them 12 years old—who snickered at IBM when it initialized its still-official name, International Business Machines. And that isn’t even the company’s original name. At its founding in 1911, IBM was known as—deep breath—the Computing-Tabulating-Recording Company.

It took 13 years for that clunker to be jettisoned. Let’s check back on Kyndryl in 13 months.

Posted at 06:00 AM in Bad Names, Names in the News, Naming, Technology | Permalink