Vowels: Who needs them?

That, it seems, was the guiding principle behind the name change, announced April 26, of Standard Life Aberdeen PLC, an asset-management firm based in Edinburgh. The company name will henceforth be rendered as Abrdn—but pronounced, as in days of yore, as “Aberdeen.”

In an official statement, the company’s chief executive, Stephen Bird, said: “Our new brand Abrdn builds on our heritage and is modern, dynamic, and, most importantly, engaging for all of our client and customer channels.” He also said the new brand “reflects the clarity of focus that the leadership team are bringing to the business as we seek to deliver sustainable growth.”

Many, many people begged to differ.

Laith Khalaf, a financial analyst at AJ Bell, told The Scotsman: “Standard Life Aberdeen needed to sort out its branding, but the new Abrdn name will likely leave investors feeling dazed and confused.” Guardian finance columnist Nils Pratley—let’s take a minute to appreciate that name—wrote that Abrdn breaks “two golden rules of marketing”: Don’t look weird, and make the name easy to write. In another Guardian story (“Too cool for schl? Linguists pour scorn on Abrdn rebranding”), Rob Drummond, a reader in linguistics at Manchester Metropolitan University, said the respelled name “smacks of old people trying to use youth language, or wanting to speak like teenagers, which is always a mistake.”

And in the Wall Street Journal, London-based reporter Julie Steinberg had some fun with e-lessness (note the byline!). 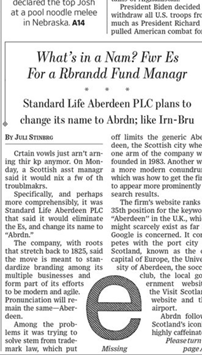 The WSJ has a paywall, so I’ll give you a free taste:

Without the vowel cues, the name sounded like “a burden.” Some thought it was a belated April Fools joke, like when Volkswagen AG’s U.S. subsidiary said the company would rebrand itself as Voltswagen of America and then clumsily clarified it was kidding.

Stephen Bird, chief executive of soon-to-be Abrdn, said the new name reflects “clarity of focus.” In a television interview on Monday, he said the name had been conjured up with brand consultancy Wolff Olins, and that it hadn’t cost a lot of money “to develop the identity.”

Remember Wolff Olins? They’re the global agency behind the much-maligned 2012 London Olympics logo and the very expensive, very short-lived (and much-maligned) transformation of PriceWaterhouseCooper into Monday.

Ms. Steinberg, whom I don’t know, hunted me down via LinkedIn and called me to ask my opinion of the Abrdn name. When I answered the phone, I was walking down a windblown San Francisco street with buses whizzing by. But I’m a professional and an opinion-haver, so I opined:

Nancy Friedman, a name developer and brand consultant in the San Francisco Bay Area, said it is unusual to see a financial company dispense with vowels, and that it looked “a little lightweight.”

“If they really wanted to rebrand they could have come up with something that’s fresh and meaningful and also legible,” she said.

On the other hand, “people get used to all sorts of things. Google sounded ridiculous at first,” she added.

Vowel-dropping has been a naming fad since Web 1.0: Think Flickr, Tumblr, Grindr, and the original Twitter, which was Twttr. Back then, scrappy start-ups bent the orthographic rules for no special reason other than to nab a cheap internet domain. When some of those companies became wildly successful, other companies copied them. Eventually we ended up with Speedwriting-style names like HLTH, Frndly, artMRKT, and—my least favorite—BHLDN. (Beholden to whom, dear wedding-dress company?) There are so many of these vwllss names that I’ve devoted two Pinterest boards to them. 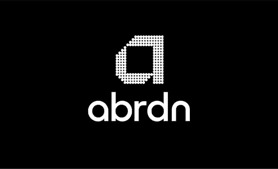 I do rather like Abrdn’s icon, a stylized lower-case “a”: the lone vowel left standing. It’s supposed to represent the transition from abacus to computer, or something like that. But the wordmark would benefit from a font that more clearly communicates that it’s a, not o.

As I wrote in a Visual Thesaurus column a few months ago (“Who Needs Vwls?”), vowellessness often communicates a playful, childlike quality: an all-consonant name can be a fun puzzle to solve. But are playfulness and childishness the qualities a financial company that oversees assets of $743.6 billion should be communicating? And I’m at a loss to understand how spelling the name “Abrdn”—but not altering the pronunciation—is an aid in internet search or trademark protection.

Coming so soon after IBM’s Kyndryl announcement, which I wrote about earlier this month, this is a depressing turn of events in legacy-business-world. If you want your infrastructure spinoff to sound important, you don’t make up a word with a bantamweight sound and a tortured etymology. And if your company is “struggling to compete” in Google search because of other entities with “Aberdeen” in their names, I submit that your problem won’t be solved by removing vowels.

No vwls? Whoever could have imagined that English would be so powerfully influenced by... Hebrew? Or should it be "Hbrw"?