Words of the week: Coronacoinages 2021

I’ve been writing about novel coronavirus words for just over a year now. (Remember quarantinis? What happened to all those covidpreneurs?) The latest coronacoinages—thanks to Ben Zimmer for coining that word—reflect a gradually changing reality: a new administration in the White House, increased availability of vaccines, and—underlying it all—the urge to return to something like “normal.”

Here are the words I’ve been tracking lately:

Fauci ouchie: This one has an almost-too-good-to-be-true origin story, courtesy of Emma Scott of Charleston, South Carolina.

A 6-year old ballet student asked me today if I'm excited about getting my "Fauci Ouchie" soon, and I will now be referring to the covid-19 vaccine as only that, because it's the cutest thing ever.

Within two days, the story had made it into Yahoo Life. And there was merch. 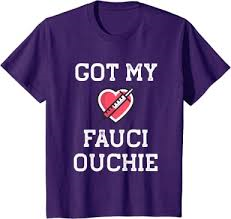 Fauci, of course, is Dr. Anthony Fauci, the director of the U.S. National Institute of Allergy and Infectious Diseases and the chief medical advisor to the president. He’s been so unfairly maligned by right-wing news outlets and anti-vaxxers in general that I’m OK with a cheery kids-say-the-darnedest-things anecdotal antidote.

A friend just sent me a pic of himself getting vaccinated.

Halfvaxxed: A synonym for halfcinated. Earliest usage on Twitter: mid-March; incorporated into a few Twitter handles. Ed Timberlake gives it a different spin.

Jab. Not new to Brits, of course, but the slang term for injection with a hypodermic needle—what Americans have customarily called a shot—is catching on in the US. (It was Lynne Murphy’s UK-to-US word of the year for 2020, which I privately thought was premature. Good thing I was private about it.) In the past, Americans have been more likely to use jab (verb and noun) in the boxing and verbal-sparring senses, but in the last few months US newspapers have started using it to refer to vaccinations. Granted, this January 21 story is about vaccinations at an English cathedral, but the Los Angeles Times could have used shots instead of jabs in the headline. And Michelle Cottle of the New York Times editorial board wrote, on March 3, about “Covid-19 vaccine shots — or jabs, as they’ve been dubbed.”

The joke in this tweet from Lindsay in Laramie, Wyoming, depends on your knowing that (a) Johnson & Johnson makes one of the vaccines, and (b) johnson is slang for penis.

I'm gonna get jabbed by 2 Johnsons next week

You may be as surprised as I was to learn that the hypodermic sense of jab originated in the US and took its time migrating across the pond. As Ben Yagoda wrote in his Not One-Off Britishisms blog in December 2020:

Interestingly, “jab” originated in American underworld slang around the turn of the twentieth century, specifically meaning an injection of narcotics. But a more general sense had migrated over to Britain by 1959, when the OED cites this quote from Punch: “Receiving the hypodermic jab intended for the bullock.” (One can only imagine the context.) More recently there’s this 1973 quote from The Times: “The visitor must..take precautions and submit to a variety of jabs.”

Way back then, all of three months ago, Ben wrote that he didn’t “recall ever encountering ‘jab’=‘shot’ in America.” Welcome to 2021! I’m not only hearing jab from American friends—mostly tongue-in-cheek—but I’ve also heard jabbie (jabbee?) and jabster to refer to “someone who’s received the COVID vaccine.” (I’ve also spotted one usage of jabster jingoism.) Maybe it’s time to give our old friend jabroni a new meaning, too.

PanDemme, panera, pandemi cup bra, panini, et al. Playing with words beginning with pan- to create substitutes for pandemic has become a full-fledged trend over the last few months, especially on Black Twitter. “We’re manipulating the structure of the word,” Adrienne R. Washington, a professor of sociocultural linguistics at Norfolk State University in Virginia, told the New York Times’s Evan Nicole Brown in a March 19 story. “We’re dropping syllables, like with ‘Rona,’ or sometimes we make them into diminutives, which are words that are more familiar or maybe even endearing.”

“You just have to kind of retreat into the most blasé or playful language because the actual tragedy of it is too much,” freelance writer Hunter Harris told Brown. “It’s also just like a funny brain puzzle to think about what words can mutate into becoming pandemic.”

Stimmy. Speaking of diminutives, calling government stimulus checks—formally known as economic impact payments—stimmies may be an endearment or a trivialization.

Vaxhole. This portmanteau of vaccination and asshole is defined by an Urban Dictionary contributor as “One who has been fully vaccinated for the COVID-19 virus and brags about it.” Vaxhole was UD’s word of the day on March 14, 2021.

Vaxxie. Another diminutive, this one with intent to belittle. The headline on a March 12, 2021, story in the Guardian reads “Why are male politicians in love with topless vaccine selfies?” The lede, by deputy fashion editor Priya Elan, is delicious:

Are you man enough for a vaxxie (that’s a vaccination selfie to you and me)? That’s the question some of us are asking after having seen a host of politicians pose shirtless while getting their Covid-19 jabs. Not since Vladimir Putin shared those topless holiday pics, perfecting the butterfly stroke and breaking actual twigs with the simple power of his legs, have there been such strangely intimate insights into those who rule over us.

I especially relished Elan’s, um, jab at Olivier Véran, France’s health minister, who for the photograph “coyly pulled his white shirt over his left breast while he was having his [shot], like some office Christmas party version of Botticelli’s The Birth of Venus.”

UPDATE: Via Twitter, Ben Yagoda shared inoculati (plural noun: people who have received COVID vaccinations). Also seen as innoculati, although the one-N spelling is more suggestive of inoculation while also winking at illuminati. Inoculati is a legitimate Italian word: a plural adjective or verb meaning “inoculated.”