Word of the week: NFT

I am going to do my best to explain the hot initialism of the week—trust me, I’m just as baffled as most non-rich, non-tech people—but first I’m going to tell you what it doesn’t stand for.

It doesn’t stand for “Not For Tourists,” the series of city guides first published in 2000. 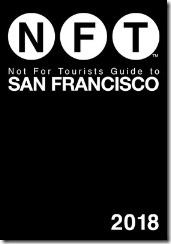 The circled sans-serif letters originally suggested the distinctive font of New York subway lines, an iconography that is Not Fully Transferable to other cities, although the San Francisco Municipal Railway does in fact operate N, F, and T lines.

Which is a shame, because I definitely understand Not For Tourists. I bought a San Francisco NFT guide in 2006 or 2007 and found it well designed and helpful in my pre-smartphone phase.

This year’s NFT stands for non-fungible token, and the reason you’ve been hearing about it (or maybe not hearing about it, if you live mostly in the Real World, lucky you) is because what was once —say, in January—a niche internet hobby is now mainstream, or perhaps just “mainstream.” Also because Jack Dorsey, the founder of Twitter, is attempting to sell the first tweet—his own, from March 6, 2006—as an NFT. Bidding reached $2.5 million on the evening of March 6, 2021.

just setting up my twttr

But that’s not an NFT. An NFT gives you ownership rights to a piece of code in a blockchain. Not copyright or trademark rights, you understand. But still: rights.

Here’s an explanation by game developer Everest Pipkin, who’s concerned about the environmental impact of NFTs (something I won’t get into here, so read the full article if you’re interested):

An individual piece of cryptoart is called an NFT. You can think of each NFT as a trading card or a collectible with an individual value that is also affected by the general market value of NFTs as a concept, the Ethereum network and cryptocurrency in general. Like beanie babies without the beans.

Is your head hurting? My head is hurting.

This would be a good time to take a break and read about the Tinkerbell effect, which is germane. I’ll wait.

Here’s the Wikipedia definition of NFT:

A non-fungible token is a special type of cryptographic token which represents something unique; non-fungible tokens are thus not mutually interchangeable. This is in contrast to cryptocurrencies like bitcoin, and many network or utility tokens, that are fungible in nature.

(Of course you remember bitcoin, because you were reading this blog in December 2013.)

She explained it better in 1m than I could in 2K words pic.twitter.com/sJ7Z7NjWH0

If you’re an artist, you can create an NFT—the jargon-y verb is “mint” an NFT—by uploading your file to an NFT marketplace such as Known Origin, Rarible, or Open Sea. (At some point I’ll probably have to do some analysis on those names, won’t I.) Then you wait for bids. Bonne chance!

Here is an article about the NFT art market that’s annoyingly set in all lower-case type except for the initialisms. (It’s a design site, of course.)

In his March 5 explainer on NFTs, NPR’s Bobby Allyn interviewed people who follow this stuff for living, like Katie Haun.:

“Remember those days where people would line up for the newest Nike Air Jordan sneakers at the physical store? This is the new digital equivalent,” said Katie Haun, a general partner at the venture capital firm Andreesen Horowitz.

“It's everything that brings together culture, and it's also a bet on the future of e-commerce,” Haun said.

This is where we get into questions like What is money? and What is ownership? and What is value? and the age-old What is art? Hey, do I look like a philosopher? I can, however, answer the question What is fungible? Here’s the OED:

Of a good that has been contracted for: that can be replaced by another identical item without breaking the terms of the contract. More generally: interchangeable, replaceable.

1649   A. Ascham Of Confusions & Revol. (new ed.) i. vi. 30   Take away this fungible instrument from the service of our necessities, and how shall we exercise our Charity?

Economic goods, as distinct from money, are not generally ‘fungible’.

Fungible is unrelated to fungus, which is probably related to the Greek word that gives us “sponge.”

And token? It’s been with us since Old English, when it meant “sign, symbol, evidence.” It comes from Old Norse teikn, which meant “zodiac sign” or “omen,” which gives us some insight into the superstitious nature of NFTs and the people who “invest” in them.

As I was reading about NFTs I kept trying to recall what they reminded me of. And then it came to me: Bill Gates’s mansion.

Back in 1991, when he was 36 and unmarried and still the CEO of Microsoft—before Tim Berners-Lee released the World Wide Web to the public—Bill Gates was building a himself a mansion in the Seattle suburb of Medina. What I remember about news reports of this project was the name of the mansion—“Xanadu 2.0,” a nod to Kubla Khan and Citizen Kane—and the description of the art that would adorn the 66,000-square-foot house: not Old Masters or Warhols, although Gates could obviously afford them, but digital representations of those pictures.

A story about this boggling prospect ran in the Seattle Times on May 6, 1991. It was headlined “Bill Gates: 50,000 Computer Paintings On Call.” The prose was breathless:

Visitors to Microsoft chairman Gates’ new mansion in Medina will find themselves in an electronic Disneyland where they will be able to “call up” a favorite painting or photograph on combination TV-computer screens.

Right now, only a billionaire could afford to try $80,000 monitors and $150,000 computer-storage devices (the house could have several) that may be needed to make this all work. …

A Gates-owned company, Interactive Home Systems, is searching the world for hardware and writing software programs that will allow an art collector to own 50,000 famous paintings instead of just one. The images could be stored in a device that would fit in a closet and be wired to screens throughout the house.

After a hard day of leveraged buyouts, a tired industrialist could come home and view something less taxing than cubism. Perhaps a sunset in Maui, displayed in dazzling colors on a high-definition screen.

How was Billionaire Bill going to pipe all that art into his house? “Gates, through IHS, has been approaching museums and photo agencies with proposals to buy non-exclusive rights to turn their paintings, sculptures and photographs into digital images stored in the computer.”

Back then, it sounded like magic—and also like a weird kink. Weren’t transmissions of pictures inherently less valuable than the pictures themselves?

It took seven years to realize this dream house, but lo, it came to pass, and every description of the place included a mention of the “rotational artwork” that shimmered ephemerally on the walls. The decades rolled by. Interactive Home Systems morphed into Continuum and then Corbis, the stock-photo site. By 2014, a startup called Artkick was offering streaming versions of art masterpieces free to anyone with a flat-screen TV. And now here we are in 2021, when the hot art-collecting trend is, basically, transmissions of pictures. All that’s changed since 1991 is the cost of entry, the means of payment, and, if I’m getting this right, the concept of ownership.

Posted at 06:00 AM in Acronyms, Art, Current Affairs, Finance, Word of the Week | Permalink

That stuff is just incomprehensible to me. However, I will take a bow for CORBIS, one of the best trademarks I’ve ever gotten registered.