Word of the week: Lingualer

What kind of word is lingualer? A rare one, that’s for sure. In fact, it may qualify as that rarest of rare words, a hapax legomenon: a word that occurs only once within a context or in the entire written record of a language. We can thank Variety, the show-business weekly that has been inventing words for more than a century, for its existence.

I spotted lingualer in a book I’ve been reading, Hollywood’s Censor: Joseph I. Breen & the Production Code Administration, by Thomas Doherty (2009), which tells the lively history of how the Code constrained Hollywood moviemakers: no profanity, no revealing costumes, no “miscegenation,” and so on. I discovered the book while researching my recent post for Strong Language, “When ‘nuts!’ was taboo.” 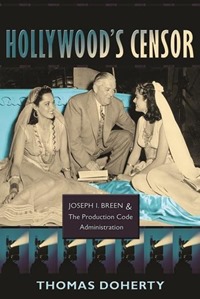 Although the Code would be officially enforced until 1968, when it was replaced by a ratings system, it started to crumble after World War II. One battering ram was the sudden influx of imports, many of them requiring subtitles for American audiences, in the late 1940s. The new foreign-language movies found their audience in a new kind of theater: the small, intimate “art house,” a term that first appeared in print around 1950. (Possibly another Variety coinage.) Suddenly, the Code office had to deal with a completely new set of challenges to the moral purity of American moviegoers.

First though, there was the problem of what to call movies whose characters spoke French, Italian, or Swedish. Variety had already coined oater (a Western film), cleffer (a songwriter), hoofer and terper  (synonyms for dancer), icer (an ice show), sudser (soap opera), and meller (melodrama). So why not call a foreign-language film … a lingualer?

Customs and state and municipal boards censors have been taking the broad view in recognition of the fact that the lingualers, playing art houses, appeal almost entirely to a sophisticated trade and get very little child attendance.

In context, you can figure out what lingualer means. But the novel word must have been too artsy for Variety’s readers, because as far as I can tell it never appeared in those pages—or anywhere else—again. Until now, that is.

One of the most controversial lingualers was Vittoria De Sica’s neorealist masterpiece Bicycle Thieves (released in the U.S. in 1949 as The Bicycle Thief). The story of a poor father searching with his son, Bruno, through the rubble of post-war Rome for a stolen bicycle, the film has no sex scenes, no scandalous décolletage. The scene that incensed the censors was one in which young Bruno walks into an alley to urinate against a wall. Chief Code enforcer Joseph Breen insisted that “the urination scene had to be eliminated in toto, the body being a vessel whose excremental nature was unmentionable and unsightly,” writes Thomas Doherty:

Though an unlikely cause célèbre, Bruno’s mimed micturation [sic]—no glimpse of genitalia or squirt of fluid soiled the screen—unleashed a torrent of headlines and commentary. Wags dubbed the vignette that Breen wanted cut and [film importer Joseph] Burstyn vowed to preserve “the sacred wee-wee.” 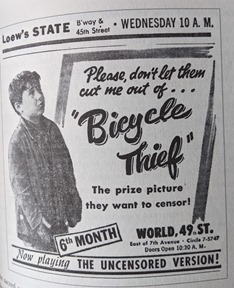 Wee woeful waif: An ad published in 1950, when the Burstyn-Breen dispute was at its height. (From Hollywood’s Censor.)

In 1952, Joseph Burstyn—no relation to actress Ellen Burstyn—made headlines because of another lingualer, Roberto Rossellini’s The Miracle, which had been banned by the New York Board of Education as “sacrilegious.” The Supreme Court’s landmark decision in Joseph Burstyn, Inc. v. Wilson determined that movies were not merely a business but a form of speech entitled to First Amendment protection. The decision marked the beginning of the end of film censorship in the U.S.

For more Variety coinages, see the Slanguage Dicionary (which doesn’t include lingualer, alas). Also seem my 2008 post, “Boffo at the B.O.”

Posted at 06:00 AM in Film, Journalism, Neologisms, Slang, Word of the Week | Permalink