Word of the week: Cascatelli

By one food expert’s count, there are at least 300 types of pasta, from teeny pastini to largish lasagne, and those 300 types have at least 1,200 names, depending on which region they’re made in. You might think there was nothing left to discover or invent, pasta-wise, but you would be wrong. Behold the newest shape—and name—in the pastaverse: cascatelli. 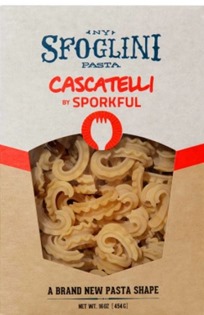 Resembling ruffled commas, cascatelli are the result of a three-year quest by Dan Pashman, host of the Sporkful podcast, to create a completely new pasta shape and bring it to market. The finished product—3,700 one-pound boxes, made and packaged by the Brooklyn-based Sfoglini company, sold out immediately; there’s a 12-week wait for the next batch, mostly because the COVID-19 pandemic has created a paper shortage*.

In a five part series on Sporkful titled “Mission ImPASTAble” released during the first half of March, Pashman narrated the fusilli-shaped path of his quest for a pasta that fulfilled three wonderfully madeupical criteria: forkability (can you spear it?), sauceability (does it hold that ragù?), and toothsinkability (how satisfying is it to bite into?). The search took him to North Dakota State University’s Pasta Lab, to a pasta-diemaker on Staten Island, and, last but hardly least, to my comrade in name development Laurel Sutton for a professional opinion on the cascatelli name.

Before arriving at cascatelli, Pashman had noodled around with other names. He dismissed the eponymous Pashmini and Sporkini as too unserious. He toyed for quite a while with millepiedi, Italian for “millipede,” the crawly insect Pashman and some of his friends thought the shape resembled. A check-in with his lawyer, who thought the name was gross, brought him back to earth. (Fun fact: There’s an Italian furniture design firm called Millepiedi.) But when another friend suggested cascatelli—a slight tweak of cascatelle, the Italian word for “waterfalls”—Pashman sensed he had a winner. Laurel Sutton agreed: The name is easy to spell and pronounce, and it’s memorable because it’s a cognate of English “cascade.” (Although nobody Pashman talked to brought it up, in Spanish a casca casco is a helmet, and to my eyes cascatelli look a little like fanciful Roman helmets.)

Not only did Pashman invent and name a new pasta shape, he has also filed the paperwork for a patent on the die used to create it, and for trademark protection for CASCATELLI. If his trademark application is accepted, it’s unlikely you’ll see Campbell’s Cascatelli-Os (or any other use of the term besides Sfoglini’s) any time soon. 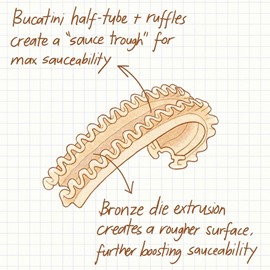 “Surely one of the things that has made cascatelli an online hit is the endlessly reproduced schematics treating the pasta like the technically engineered object that it is.” – Rob Walker for Marker. Image via Sfoglini.

A couple of additional naming notes:

According to the OED, spork—a blend of spoon and fork—first appeared in print in 1909, in a supplement to the Century Dictionary and Cyclopedia, an American reference book published between 1889 and 1914. But for a dictionary to have noticed it, the word must have been in circulation for some time before 1909. (I tried searching Google Ngrams for earlier citations, but gave up because the pre-1909 mentions are of people named Spork.) I was somewhat surprised that the OED defines spork as “a proprietary name.” Sure enough, Spork became a registered trademark of the Van Brode Milling Company of Clinton, Massachusetts, in 1970. However, the trademark has since expired.

And how about Sfoglini, the name of the company that’s producing the cascatelli (or Cascatelli®, as we may have to start calling it)? In Italian, a sfoglina is a woman who makes sfoglia, a type of thin, leaf-like pasta. (Foglia is Italian for “leaf.”) The feminine plural of sofglina is sfogline; the two men who founded Sofglini masculinized the word in their company’s name. Read more about the sfoglina tradition, which originated in Bologna.

* The paper is required for the packaging, not the pasta.

Posted at 06:00 AM in Food and Drink, Italian, Naming, Neologisms, Trademark, Word of the Week | Permalink

there’s a 12-week wait for the next batch, mostly because the COVID-19 pandemic has created a paper shortage.
Good lord, woman! What's this stuff made of?

Erm, just wanted to point out that the Spanish for helmet is ‘casco’, not ‘casca’ (the latter exists as a term for fruit skin or peel, but it's very rare).