Flirt and its relatives—flirty, flirtation, flirtatious—have a fickle history in English. The noun and the verb both first appeared in writing around 1550; the noun meant “a jest” or “a stroke of wit,” while the verb meant “to turn up one’s nose” or “to scoff.” By the 1760s, Samuel Johnson was using flirt to mean “a pert young hussy” (a woman of flighty character). In Aphra Behn’s 1689 play The Widow Hunter—one of the the first plays to be set in British colonial America—one character is a “tapstress” (tavern-keeper) named Mrs. Flirt. The sense of “one who plays at courtship” dates from the first half of the 18th century, when it could apply to either a man or a woman. 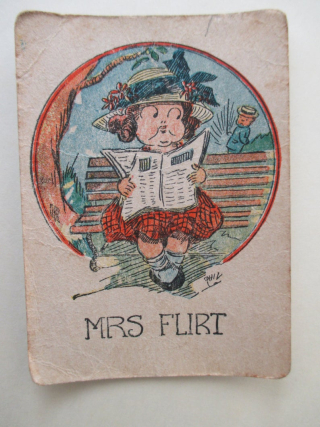 “Mrs. Flirt,” a card from a vintage Old Maid deck, via Etsy

The OED says the word’s origins are onomatopoetic –“compare flick, flip, flerk, spurt, squirt”—while the Online Etymology Dictionary points out that English words that begin with fl- often connote “a loose, flapping motion” and connect “the notions of flightiness and licentiousness”: consider fly, flicker, flash, flap, fledgling, flutter,fling, fluster, flit, flurry, flock, fling, flounce, flinch, flail, floozy, and Scots flisk, “to fly about nimbly.” Another theory holds that the word was influenced by an Old French verb, fleureter (“to talk sweet nonsense” or “to touch a thing in passing”—a flower, say). If so, English has repaid the debt: the French have borrowed flirter (“to flirt”) since the 19th century.

Flirt was popular in literary and cinematic titles in the early 20th century. On IMDb I counted 25 silent films, made between 1901 and 1928, with flirt in their titles, including Don’t Flirt, Flirty Fan, How to Flirt, The Magnificent Flirt, and Married Flirts. Most of the flirts in question are young women, but in this 1917 short film the comic genius Harold Lloyd plays the title character. 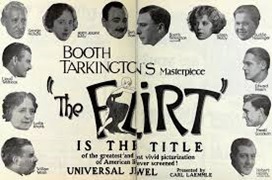 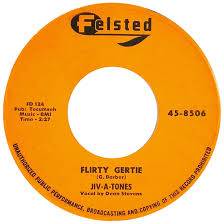 Flirty Gertie, recorded in 1958 by the Jiv-A-Tones

Flirt has also enjoyed a robust life as a commercial name. Between 1947 and 1955, the enterprising Robert Harrison—best known for Confidential magazine—published a girlie mag called Flirt that, according to Wikipedia, “mainly featured fetishist photo-stories.” (Harrison’s other titles included Wink, Whisper, Eyeful, and Titter. That last publication was touted as “America’s merriest magazine.”) 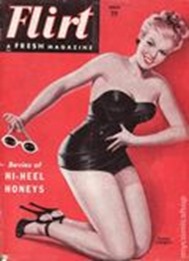 Unsurprisingly, flirt appears in the names of a raft of online dating/hookup services: ClickAndFlirt, EasyFlirt, QuickFlirt, iFlirt, UpToFlirt, FlirtWithMe, EliteFlirt. Among the 86 FLIRT trademarks in the USPTO is Flirt vodka, produced in Bulgaria and notorious for its “predictably sizzling and provocative” ads, according to The Spirits Business. 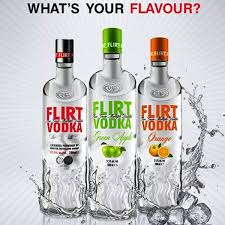 Flirt also lends itself to punny business. “Flirty Dancing” was an American TV series that lasted a single season on the Fox network, in 2019. (Synopsis: “Strangers are taught a dance, then dance together on a blind date to see if they have chemistry.”) IMDb shows two unrelated TV episodes titled “The Flirt Locker,” from 2010 and 2011. (The Oscar-winning film The Hurt Locker was released in 2008.)

By far the most popular object of flirtation in recent decades is disaster. The 1996 Ben Stiller comedy Flirting with Disaster, which elevated an existing idiom to title status, sparked a bunch of copycats: IMDb shows 17 television episodes with the identical title. 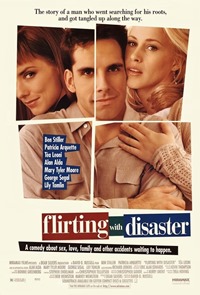 And the last 12 months have seen a spike in “flirting with disaster” news stories. Donald Trump was “flirting with disaster” by holding rallies during the pandemic, a former White House medical advisor told CNN last July. “Why does California’s power grid keep flirting with disaster?” asked a Los Angeles Times headline last September, in the middle of wildfire season. “We’re flirting with pandemic disaster,” warned a January 28, 2021, story in the New Yorker. Premature restaurant reopenings appear to be another disastrous flirtation. This Valentine’s Day, the most romantic way to flirt may be the old-fashioned way: at a discreet distance.

Posted at 06:00 AM in Film, Holidays, Magazines, Sound Symbolism, Television, Trademark, Word of the Week | Permalink