The Cherokee Nation is asking Jeep to rename its Cherokee and Grand Cherokee models. The carmaker has been using (and defending) the name for 45 years. (Car and Driver)

“‘The president has been clear to all of us — words matter, tone matters and civility matters,’ said Jen Psaki, the White House press secretary.” Michael D. Shear reports in the New York Times:

At the Department of Homeland Security, the phrase “illegal alien” is being replaced with “noncitizen.” The Interior Department now makes sure that mentions of its stakeholders include “Tribal” people (with a capital “T” as preferred by Native Americans, it said). The most unpopular two words in the Trump lexicon — “climate change” — are once again appearing on government websites and in documents; officials at the Environmental Protection Agency have even begun using the hashtag #climatecrisis on Twitter.

Motion to henceforth refer to viking runes as "Norse code."

The COVID pandemic has produced more than 1,200 new German words over the last year. I’m fond of impfneid (envy of those who have been vaccinated). (hat tip: Liz Hicks and the Leibniz Institute)

Cartoonist Tom Gauld suggests some literary collective nouns. My favorite: a gruop of proofreaders. (The Guardian)

A fun clip from my Valentines virtual show! Get tickets now for my “worldwide comedy pizza party” March 24-27 under https://t.co/rbND9XFBHu! Not .biz!!

Novelist Lauren Oyler makes the case for semicolons: “There are very few opportunities in life to have it both ways; semicolons are the rare instance in which you can; there is absolutely no downside.” (New York Times Magazine)

Case in point: What influenced the rise of the boy’s name “Tiger”? (Nancy’s Baby Names)

Mike Pope researched two interesting words for last Friday’s blog post (#257 in the series!): bezzle and hobby: “The original hobby-horse was not a toy horse-on-a-stick; it was a kind of horse costume used on stage, in dances (like morris dancing), and in parades and ceremonies.

Now playing at my neighborhood cinema, the 95-year-old, pandemic-closed Grand Lake Theatre: a set of fabulous and hilarious movie “revision” posters. Santa Fe artist Matthew Chase-Daniel created them to promote COVID-safe practices; they’re on view at theaters around the US, with more locations coming soon. 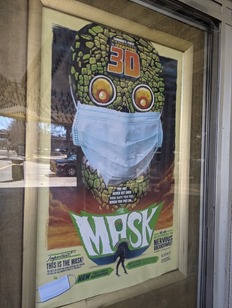 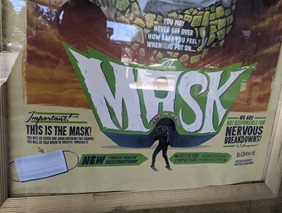 “The Mask” at the Grand Lake Theatre

Tomorrow’s the deadline in the Minnesota Department of Transportation’s name-the-snow-plows contest. One popular suggestion, “Abolish ICE,” was disqualified because it was deemed too political. (New York Times)

Bee A: I plead guilty to an addiction to Spelling Bee, the New York Times daily word-search puzzle that has been a distraction—and a surprising creator of community—during the pandemic. In a new episode of the Slate Culture podcast, hosts Dana Stevens, Julia Turner, and Stephen Metcalf chat with Bee editor Sam Ezersky about why (and when) some puzzles are more challenging than others and other Bee secrets. The segment begins at 18:46.

Bee B: The Washington Post’s Style Invitational contest is also Bee-sotted. The current contest challenges readers to make up fake (but convincing) words from any of a set of 30 word lists. Deadline is March 4. Read all about it.

By the way, I’m writing an essay about the Bee myself, focusing on what it teaches us about pattern recognition and word formation. Let me know if there’s anything else you’d like me to cover: leave a comment or send an email.