The first story was the Christmas Day explosion in downtown Nashville that authorities called “an intentional act.” Three people were injured when a parked RV blew up at 1:22 a.m., injuring eight people and killing the probable suspect, Anthony Quinn Warner, 63.

Then, on December 31, a hospital pharmacist in Grafton, Wisconsin, was arrested after it was learned he had ruined more than 500 doses of coronavirus vaccine by under-refrigerating them (and after 57 people received compromised doses). At first, the destruction “appeared to be an honest mistake,” the Washington Post reported. But no: the pharmacist, who has not yet been identified, acted “intentionally.”

Some people would have liked to see different words attached to these unrelated incidents. Terrorism, perhaps, for the Nashville explosion: As one commenter wrote on the Tennessean website, “If his name was Abdullah we would certainly call it terrorism. But he’s a white guy. Classic example of American racism. Let’s all pretend we don’t see it.” In their coverage of the Wisconsin case, Law and Crime, Reuters, and a few other news outlets used the word sabotage. Sabotage is a federal crime.

So much (for now) for bad intentions. As New Year’s Eve approached, I began reading different kinds of stories about good intentions. New year’s resolutions, these stories instructed me, are a bad idea and new year’s intentions are much better. Resolutions, it seems, can make you feel bad if you don’t keep them. Resolutions require resolve, which is, let’s face it, a bummer. Intentions, on the other hand, are about “hopes and wishes” rather than commitments—about intending to change habits. Or, as an AARP article about new year’s intentions put it, “Seek out a journey, not an end point.” (Yep, it’s our old all-purpose friend journey once again.)

“Intentions” and “intentional living” have been big buzzwords in the Feelings Industrial Complex for much of the last decade, but the concept was first expressed in Christopher Isherwood’s 1940 book My Guru and His Disciple. The guru, Gerald Heard, told Isherwood that he followed “intentional living,” and added that “the most deadly pretension” is believing “you are a spiritually superior person.”

Intentional living owes some of its popularity to Joshua Becker, a former pastor from Aberdeen, South Dakota, who decided to jettison many of his possessions (and maybe his pretensions as well) and preach the gospel of minimalism. On his website, Becoming Minimalist—“one of the top ten personal development websites,” Success magazine gushed in 2015—Becker wrote “The Helpful Guide to Living an Intentional Life.” His advice includes “Decide to live your life,” “Set goals,” and “Stay focused,” and wow, I’d never considered any of those things! Take my money!

Also in 2015, “#1 New York Times bestselling author” John C. Maxwell published Intentional Living, which promises to guide you “on your personal path through a life that matters.” This is the same John C. Maxwell who published 15 Invaluable Laws of Growth, so obviously he knows more than you do. 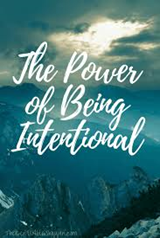 Long before all this intention lit came along, there was the Foundation for Intentional Community (there’s a website for that), which grew out of the student cooperative housing movement founded in Ann Arbor, Michigan, in 1937 and which was incorporated as the nonprofit Fellowship for Intentional Community in 1986. (It rebranded as a foundation in 2016.) Intentional communities involve living with people you choose to live with, which was not my experience of co-op housing when I was an undergrad at Berkeley, but maybe things have changed.

Intentionality is a philosophical concept that, like many awkward English words, was translated directly from the German (Intentionalität), in this case by the British philosopher W.R. Boyce Gibson in 1931. Intentionality, according to the Stanford Encyclopedia of Philosophy, “is the power of minds and mental states to be about, to represent, or to stand for, things, properties and states of affairs.” If you want to know more, I suggest reading someone else’s blog.

Intentional fallacy—the error of basing the assessment of a literary work on the author’s intention rather than on one’s response to the work—was coined in a 1946 essay by two American literary critics, W. K. Wimsatt Jr and Monroe C. Beardsley. This line of thinking gave rise to an emphasis on text above all, a topic—again—better addressed by someone else’s blog.

And long before all that, the Roman Catholic Church made much of intention. You can offer a Mass for the “special intention” of another person, and the pope publishes monthly prayer intentions. (January’s intention is “human fraternity.”)

Even in secular life, intentional can have a whiff of piety. It means “thoughtful, but even more so,” and has a bit of that purpose-driven life nimbus around it. It gives even pop-culture historical fantasias an air of sanctimony.

With shows such as “Bridgerton,” and "The Witcher,” we see how even Eurocentric fantasy can be more intentional in its approach to diverse representation. https://t.co/AR68PZUgsf

Etymologically speaking, intention comes from a Latin root meaning “to stretch out,” which came to mean “to turn one’s attention.” (Attention shares that tent- root.) In Middle English, intention could mean “emotions” or “heart,” a sense that lingers around some of our current usages.

As for resolution, we now think of it implying “steadfastness,” but it originally meant “a breaking into parts” or “a reducing into simpler parts.” Quirkily enough, that’s pretty much what intentional-living fans are advocating. They just use a different word to do it.

Posted at 06:00 AM in Current Affairs, Religion, Word of the Week | Permalink