« On the Visual Thesaurus: Who needs vwls? | Main | January linkfest »

Here’s the line from “The Hill We Climb”:

Scripture tells us to envision that everyone shall sit under their own vine and fig tree, and no one shall make them afraid. 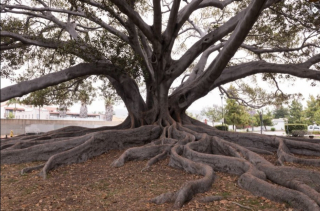 The Moreton Bay fig tree, in Santa Barbara, California, is said to be the largest fig tree in the US. (Via Library of Congress)

If I were doing textual analysis I’d have a few things to say about how that line does or (more likely) does not connect to anything else in “The Hill We Climb,” and why “Scripture says” is as weak as “The dictionary defines __,” but I’m going to give you (and myself) a break. Instead, let’s go back to the original language, which appears in three places in the Old Testament: Micah 4:4, Kings 4:25, and Zechariah 3:10.1. The Micah version is the best known, primarily because of the lines that precede “vine and fig tree.” Here’s how it reads in my English translation of the Hebrew Bible:

And they shall beat their swords into plowshares,
And their spears into pruning-hooks,
Nation shall not lift up sword against nation,
Neither shall they learn war any more.
But they shall sit every man under his vine and under his fig-tree;
And none shall make them afraid;
For the mouth of the LORD of hosts hath spoken.

The vine-and-fig-tree verse was George Washington’s favorite; he cited it at least 50 times. If you aren’t up on your Hebrew prophets, or on Washington’s correspondence, you may have learned the verse from the lyrics of “One Last Time,” a song in Hamilton: “Scripture says [yes, that again], Everyone shall sit under their own vine and fig tree/And no one shall make them afraid.”

[A personal aside: When I was 10 and consigned to a Jewish sleepaway camp with a lot of kids I didn’t know, I made a mosaic out of leather scraps depicting the vine-and-fig-tree verse. I was an unhappy camper, but that Arts and Crafts episode was a bright spot.]

Figs and fig trees (Ficus carica) are ancient, storied, nutritionally valuable, and incredibly interesting. The Buddha is said to have attained enlightenment under a fig tree. Fig trees were introduced to Mexico in 1560 and to California in 1769; in Virginia, Thomas Jefferson successfully propagated a species of fig that he’d imported from France. The traditional “figgy pudding” of the Christmas song doesn’t contain figs. You can read more about the botany and history of the fig in a BBC Earth article. But I have other figs to fry, namely:

Fig leaf. In Genesis, Adam and Eve cover their nakedness with fig leaves. Since the 16th century, “fig leaf” has been used metaphorically to mean a coverup or a flimsy disguise.

(Also see the Figleaves brand, below.) 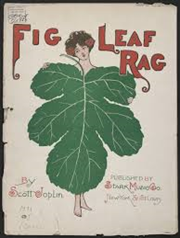 In full fig. “Completely dressed and outfitted.” No relationship here to the fruit. Here’s the OED: “It has been asserted that in fashion prints ‘Full fig.’ (abbreviation for figure) and ‘Demi-fig.’ were formerly used for front and back or side views of the figure; but we have failed to find confirmation of the statement.” “It is outrageous,” sniffs Brewer’s Dictionary of Phrase and Fable (1894), “to refer the phrase to the fig-leaves used by Adam and Eve, by way of aprons.”

Merriam-Webster says there’s a verb “to fig,” meaning “to adorn,” but gives no other information.

Not give [or care] a fig. It’s not a minced version of “not give a fuck.” Rather, from the late 1400s on, “a fig” was anything “small, worthless, or contemptible,” according to the OED. The word meaning “fruit of the fig tree” has been in the lexicon since Old English, when it was spelled fic.

Sycophant. Yes, there’s a fig hiding in the word we now use to signify a toady or a servile flatterer. Greek sykophantes—a false accuser, a slanderer—literally means “one who shows the fig,” from sykon (“fig”) and phainein (“to show”). The OED: “The explanation, long current, that it orig. meant an informer against the unlawful exportation of figs cannot be substantiated.”

Sykon could mean “vulva” as well as “fig” (maybe because of a presumed resemblance), and “giving the fig”—extending the thumb between the closed second and third fingers of a fist—“was an indecent gesture of ancient provenance … with the intended effect of the modern gesture of ‘flipping the bird’” (Online Etymology Dictionary). Here’s a Linguist List thread from 1995 with various theories and citations for “giving the fig.” 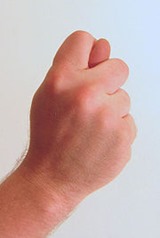 Fig Newtons, the fig-paste-filled soft cookies invented in 1891 by the F. A. Kennedy Steam Bakery in Cambridge, Massachusetts, were originally called simply Newton, after the name of a nearby town; the name was changed to Fig Newtons shortly after the introduction. (There is no connection to Sir Isaac Newton.) In 2012, the “Fig” was dropped—the cookies come in many fruit varieties now—and the brand is simply Newtons. In the 1970s, a commercial for the brand featured an actor in a “Big Fig” costume doing a dance called the Fig Newton. (“Is it good? Darn tootin’! Doin’ the big Fig Newton.”)

Fig’n Awesome—an impressive double entendre—is a fig liqueur made by Sonoma Portworks in Petaluma, California. From the website: “Mahogany in appearance, Fig’n Awesome has the aroma of sweet apricot flowers. California figs are steeped in small batches in our neutral grape spirit, capturing a touch of sweetness from the fig juice before giving way to rich flavors of figs and apricots. The finish is smooth and wonderfully lingering.”

FIGS Scrubs—uniforms for medical staff—was founded in 2013 and is headquartered in Culver City, California. One of the co-founders had previously launched a necktie company that was also called FIGS and evidently didn’t want to let the name go to waste. It’s an acronym, or maybe a backronym: “fashion inspires global sophistication.”

Big Fig Mattress uses a fig in its logo, but “fig” is an abbreviation: This company sells “the mattress for a bigger figure.” The company was founded in 2016 and is based in Columbus, Ohio.

Fig Loans provides “credit-building alternatives to payday loans.” The company was founded in Texas in 2015 by a Wharton School graduate and now operates in seven states. There’s a stylized fig in the logo, but no explanation of the name. Maybe they’re good with figures?

Fig.co is a crowdfunding site for video-game developers. It was founded in 2015—the mid-2010s were good years for figgy startups—in San Francisco. Once again: figgy logo, no figgy story.

Lego “figs,” an informal and unofficial truncation of “figures,” are available as big figs and mini-figs. 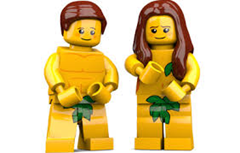 Fig is short for Figueroa, a 25-mile-long street in Los Angeles County named for José Figueroa, a Mexican governor of California from 1833 to 1835. (“Figueroa” is a Galician surname related to figueira: fig tree.) The Spanish Colonial-style hotel at 939 South Figueroa Street in downtown L.A. is familiarly known as the Hotel Fig.

Textbooks & reference books are also always "gettin' figgy wit it" with all their "see fig 1" and "refer to fig 2."

I'm prepared to give Ms. Gorman a partial pass for "Scripture tells us...." One can make a case for that passage's being four throwaway syllables used as much for meter as for meaning.