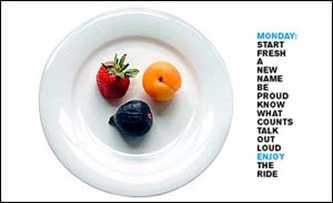 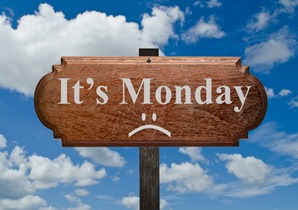 My Monday explorations started when Instagram’s blind-squirrel algorithm served me a promoted post from Monday Swimwear, probably because I sometimes post swimming photos. The company was founded in Los Angeles in 2014 by an Australian Instagram model, Natasha Oakley, and her fellow swimsuit blogger, Oakland-born Devin Brugman. I could not find an explanation for the “Monday” name.

From there, I just started Monday-hopping.

Monday haircare launched in March 2020 in Australia and New Zealand. Almost immediately, it got the wrong sort of press: from hairdressers complaining the products caused hair damage. The website’s home page suggests the rationale for the name: “Welcome the week with luxury haircare—because why should Friday get all the attention?”

The team-management company Monday, which snagged the coveted Monday.com domain, was founded in New York in 2012. I’d never heard of this Monday, nor have I ever used a team-management “solution,” but now of course I’m getting promoted tweets from the company.

“Make Monday great,” enthuses a handwritten welcome on the UK Monday’s home page (MondayAgency.com). At least I think this company is in the UK; the site is vague on this sort of detail. It does have a credo, though: “Monday believes that brands have a unique opportunity to provide value in the new customer environment.” They do brand strategy, brand identity, digital design, and other related things. (Hat tip: Mark Gunnion.)

Hello Monday is a creative studio in New York, Copenhagen, and Aarhus that “handcrafts digital (and magical) products, brands, and experiences.”

Then there’s Monday Creative, in Vancouver, BC, which claims to “build brands that enhance the human potential.” One of those brands is Lululemon. I like Monday Creative’s footer statement, especially for its typography: “WE LIVE, WORK AND PLAY ON THE BEAUTIFUL BUT UNCEDED TERRITORIES OF THE XʷMƏΘKʷƏY̓ƏM (MUSQUEAM), SḴWX̱WÚ7MESH (SQUAMISH), AND SEL̓ÍL̓WITULH (TSLEIL-WAUTUTH) NATIONS. WE ARE INCREDIBLY GRATEFUL.” This sort of acknowledgment is becoming more common here in the Bay Area, and maybe elsewhere in the US, but Vancouver is where I first encountered it.

The aforementioned are (presumably) positive usages of “Monday.” I did find a Bad Monday “tattoo-inspired apparel” brand in the UK. The business may have started at a challenging time, but it now has a rather chipper brand personality.

Why the surge in “Monday” branding? It may have something to do with Cyber Monday, a term that didn’t exist before 2005, when it was invented by the US National Retail Federation to encourage shopping on the Monday after Thanksgiving. If you’d previously associated Mondays with the Mamas and the Papas’ breakup song (“can’t trust that day”) or the Boomtown Rats’ school-shooting anthem (“I don’t like Mondays”), now you had a reason to turn that frown upside down.

By the way, if you’re now thinking of jumping on the Monday-brand bandwagon yourself (which, for the record, I don’t advise), here’s a hot tip: the domain that PwC briefly used to announce its spinoff—IntroducingMonday.com—can be yours for $2,795.

Posted at 06:30 AM in Branding, History, Naming, Redundancy | Permalink

I worked for Price Waterhouse's consulting arm in the early 1990s in the area of computing, but when I left I lost track of what was going in that area. I did see that Price Waterhouse joined with Coopers & Lybrand in 1998 to form PricewaterhouseCoopers – one of the least inspiring names I know. I also heard, eventually, that the consulting arm was sold to IBM, but I didn't know about that brief period of being called Monday. I wonder if the naming was done by the same people who came up with PricewaterhouseCoopers. I'm not impressed with the advertisement either: a strawberry, an apricot and a fig (I think). So what. I thought the words at the side were a list, until I realised that it was BYOP (bring your own punctuation). As far as I can make out, the only worthwhile statement to be extracted is 'A NEW NAME'. The rest, if I have punctuated correctly, is just generic suggestions, but I can't tell whether they are directed to staff, clients, potential clients, readers or what. Would I pay thousands to consultants to get important work done if they were telling me to 'Enjoy the ride'? I hope that the actual ad had a little more explanation in some fine print.
Fun fact: Australia's only representative in the Athens 1896 Olympics was Edwin Flack, an accountant working in London with Price, Waterhouse & Co. He won two gold medals, in the 800m and the 1500m. See more at his Wikipedia entry.

What is it about Monday? Even The Mamas & The Papas "can't trust that day."

I tell anybody who cares to listen (my students ALWAYS listen) that Monday, especially Monday morning, is my favorite time of the week. Why is that?

...Because nothing has had time to turn to crap.