« Word of the week: Intentional | Main | Some words for this week »

How about “infamation”? A process that leads to the state of being well known for some bad quality or deed. A neologism modeled from “defamation”.

Or! “Infamicide”, brand death due to an infamous association. Neologism modeled after “genericide”.

(This, by the way, is the mark of a professional name developer. Never stop with your first good idea; keep pushing through.)

Sure, one might carp a little about infamicide. Strictly speaking, and following the model of regicide (killing a monarch) and homicide (killing a person), infamicide ought to mean “death to infamy.” And there’s a chance it could be confused with infanticide (killing an infant)—a big chance, if you’re using Google search. 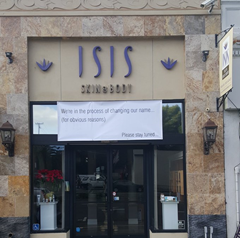 ISIS, a day spa in Oakland, California, changed its name to ELYSSIUM in 2016 to avoid being confused with a terrorist group.

But if genericide can be a legally accepted term, signifying “death to a brand name through generification,” than surely infamicide can be our new way to refer to brand names that have become skunked by current events.

Although various Corona brands, including Corona beer, have so far weathered the coronavirus pandemic with their names intact, the same can’t be said about Ayds, a brand of diet candy that was mortally wounded by association with HIV/AIDS (which causes horrific weight loss, among other things). Even name changes to Aydslim (in Britain) and Diet Ayds (in the US) didn’t help sales, and the product was withdrawn from the market by 1993.

As I ponder this week’s headlines, I am thinking of one prominent brand name that deserves an equivalent death by infamicide. This name, five letters long, is emblazoned on hotels, golf courses, residential towers, a state park, and a street in Kalispell, Montana. In British English, it is a colloquialism for “flatulence.” In American English, especially but not only because of the events of January 6, 2021, a date that will live in infamy, it should be expunged, not from history books—it’s important to learn from our mistakes—but from the landscape and the brandscape.

It has already started. By the end of 2019, at least 10 properties owned by the Trump Organization had dropped “Trump” from their names, including hotels in Toronto, Panama, and Manhattan’s SoHo neighborhood. There’s a long list of other businesses and public entities that are overdue for name changes as well.

I might, however, grant a waiver to Neopalpa donaldtrumpi, a species of micro-moth with distinctive yellowish-white scales covering the head. It all depends on whether it’s micro enough.

** Not to be confused, although it is indeed very confusing, with Corvid Cycles, which pops up when you search for “corvid velo” because velo is a synonym for bicycle.