« Ambiguous acronym of the week: WTP | Main | On the Visual Thesaurus: Brand names of the year for 2020 »

Before Time(s). Shorthand for “the time preceding the COVID-19 pandemic.” In a Word on the Street column for the Wall Street Journal, Ben Zimmer traced its current usage to mid-April 2020, and observed that it draws on “a longstanding trope in fictional accounts of life after some apocalyptic event, as portrayed in novels, movies, and television shows.” The most influential and relevant “Before Time” before our time was probably a 1966 episode of “Star Trek.” Zimmer writes: “A young girl named Miri … explains how the planet’s grown-ups, known as ‘Grups,’ disappeared: ‘That was when they started to get sick in the Before Time. We hid, then they were gone.’ ”

BIPOC. The acronym, which stands for Black, Indigenous, and People of Color and is pronounced BUY-pock, may have first appeared in a 2013 tweet. It became ubiquitous during the May and June protests against police killings, and appears to be here to stay. Not everyone loves it, the New York Times reported in June: some people are confused by BI, thinking it stands for “bisexual,” while others, like podcast host Sylvia Obell, say it’s “lazy to lump us all together as if we all face the same problems.”

Boogaloo. The name of a 1960s dance style was commandeered by gun-rights extremists who advocate for a “second Civil War” against their political opponents. For complicated reasons, they wear Hawaiian-style shirts in all weather. In mid-February, hundreds of them showed up, totin’ their guns, at the Nebraska state capitol to protest some sensible restrictions on gun ownership. For a fuller explanation, read my February 23 post. 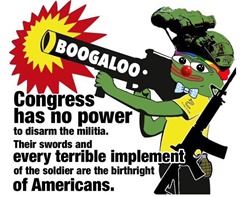 Cottagecore. Fashion took a back seat to comfort in 2020 (see hard pants, below), with one notable exception: an effusion of flouncy, girly, nostalgic dresses like the “strawberry dress” that started the trend. Cottagecore—the -core suffix tells us it’s an aesthetic or style movement—represented an escape from enforced indoors-ness and a yearning for health and beauty. Read my September 21 post about cottagecore.

Covidiot. There have been many, many #coronacoinages—I’ve published four posts about some of them—but this one, a tidy blend of covid and idiot, gets my vote for Most Useful Word of the Year. It’s a handy label for anyone who won’t wear a mask, or can’t seem to wear one correctly, or decides to throw an office holiday party for hundreds of employees in the middle of a COVID-19 surge. There’s even a nice Spanish version: pandejo, a portmanteau of pandemia and pendejo (the latter word translates, roughly, as “asshole”).

Defund. “Defund the police” was the slogan that stood out during the many nationwide protests, in May and June, of police killings of unarmed people of color. Defund raised many questions: Did it mean “eliminate all police funding” or just some? The discussions were often thoughtful and productive. For more, read my June 10 post on “defund the police.”

Doomscrolling. The bad news just kept getting worse, and yet we couldn’t stop thumbing our phones. Doomscrolling had surfaced in an October 7, 2018, tweet that had nothing to do with COVID, but after March 2020 we had an intensified need for “obsessively reading social media posts about how utterly fucked we are.” In November, though, we saw the rise of doomscrolling’s antonyms, joyscrolling and gleefreshing.

Hard pants. Shelter-in-place? More like shelter-in-PJs. (I even saw references to “nighttime pajamas” and “daytime pajamas.”) With everyone retreating into sweatpants and boxer shorts, we needed a retronym for “lower-body garment with fixed waistband and zipper.” And David Mack supplied it.

my boyfriend has been wearing sweats so much he has started calling normal pants... "hard pants"

Within a week, New York magazine’s The Cut had picked up hard pants, and by May it had made it into the New York Times.

To be fair, the Directrice blog had tried out (and maybe even coined) hard pants back in 2015. But it took the pandemic to make the coinage not just clever but mandatory.

Kraken. The mythical Scandinavian sea monster made two prominent appearances in 2020: as the name of Seattle’s new professional hockey team (with a very cool logo) and as a repurposing of a much-memed line uttered by Liam Neesom, as Zeus, in the 2010 remake of Clash of the Titans. “Release the Kraken!” acquired a political second life, Mark Liberman wrote in Language Log on November 25, “as a way of promising to reveal evidence of massive fraud in the 2020 U.S. presidential election. Given that the cinematic Kraken was the key destructive force in a failed satanic plot, the current political usage is either deeply ironic or deeply subversive.” Kraken is also a brand of “bizarre and fierce” Caribbean black spiced rum introduced in 2010, and the name of a cryptocurrency exchange launched in 2011. 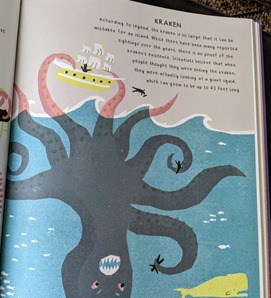 Kraken in The Dictionary of Difficult Words, by Jane Solomon; illustrations by Louise Lockhart (2019)

Long-hauler. Illness, hospitalization, and death aren’t the only dire consequences of COVID-19. Many infected people—the long-haulers, a term borrowed from the transportation industry—go on to suffer lingering and often bizarre symptoms for weeks or even months. Read my July 6 post on “long-hauler.”

Mask. With the notable exception of South Dakota—which in November was leading the country in new COVID cases—most places in the U.S. finally, if grudgingly, mandated mask wearing. The requirement became a political flashpoint, spawned a cottage industry of creative face coverings, and spurred linguistic innovation: maskne (mask-acne), mask-shaming (the latest in a long list of -shaming compounds), maskhole (that asshole who refuses to wear a mask, even when asked politely), maskadaisical (said of people who “forget” to wear masks or wear them under their chins). 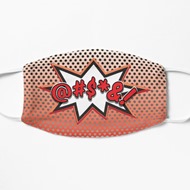 Pandemic. Well, obviously. Dictionary.com and Merriam-Webster independently chose it as their word of the year based on online lookups. I include it here not solely because of its ubiquity but also because it inspired so many spinoffs. If you thought COVID-19 was cooked up in a Chinese lab or that the virus was “activated” by face masks, you called it a plandemic. If you thought the White House response to the pandemic was idiotic, you called it a pandumbic, especially if you were “The Daily Show.” Maybe the flu and COVID would create a twindemic double whammy. And when Vice President Mike Pence trotted out his all-male coronavirus task force, someone quipped that “it must be a mandemic.” Superspreader event. The OED tracks superspreader back to a 1973 article in the Journal of Infectious Disease, but that reference—like most before this year—was to an individual who transmits a disease to a large number of people. (Typhoid Mary is often given as an example.) This year we began talking about superspreader events: large gatherings with little or no social distancing—like the late-summer Sturgis motorcycle rally or the Rose Garden swearing-in of Supreme Court Justice Amy Coney Barrett. A Boston biotech conference held in February, early in the pandemic, is reckoned to have led to at least 245,000 COVID cases in the US and Europe.

Weird. Last in alphabetical order, but still my #1 word of the year for 2020—a year of weirdness in book titles, a magazine cover story, baby naming, astronomy, clarinet music, and life in general. Read my November 16 post about weird. 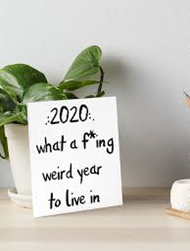 Euphemism of the year:

Human capital stock. I’m pretty sure that in English we call it “people.”

Phrase of the year:

“You’re on mute!” Uttered at least twice during every Zoom call.

“We’re all in this together.” It was the title of a song in High School Musical (2006) before it became an early-pandemic appeal for solidarity in “flattening the curve.”

We've been using the terms "soft pants" and "hard pants" for some time, but independently from any sheltering in place. A friend of ours liked to put on what I believe is called "lounge wear" while at home, but was adamant that those flannel pants were NOT pajamas, so he termed them "soft pants." Which inevitably led to the term "hard pants" for the type you put on to go outside. Tho these days, who cares, right?

A similar backformation was "rough jazz" for the kind of music that contrasts, so to speak, with smooth jazz.