From August on, many of us obsessively checked the maps on the PurpleAir app, tracking real-time air quality in what was to be the most destructive wildfire season in our state’s history. (New fires are still blazing in parts of California.) There are other such services, such as AirNow, but PurpleAir’s highly localized data made it especially valuable in the San Francisco Bay Area’s dozens of microclimates.. 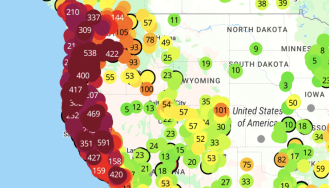 Screenshot, September 11, 2020, showing more than 400 parts per million of airborne particulate matter in most of California and the West Coast.

You would think that a vital service like PurpleAir would be run by the federal government, or maybe the state. Not so: PurpleAir is a tiny for-profit company founded in 2015 and based in Draper, Utah, near Salt Lake City. In fact, the US Environmental Protection Agency depends on PurpleAir’s data, not the other way around. “We used to rely on the government to warn us about dangerous conditions,” science journalist Annalee Newitz wrote in a September 4 New York Times op-ed, “but with a president who denies climate change and has ordered deep budget cuts at the E.P.A., we have to rely on each other.”

California’s other empurpling is pandemic related. In August, Governor Gavin Newsom announced a color-coded “tier” system for COVID-19 tracking. As of December 1, 51 of California’s 57 counties, representing 99 percent of the state’s population, were in the purple (“widespread”) tier. On December 3, the governor announced a new regional state-at-home order, which will remain in effect for at least three weeks. 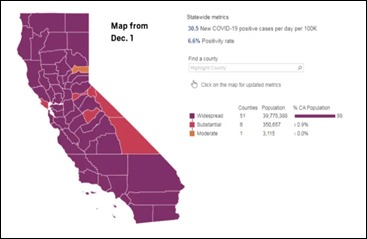 Map from San Jose Mercury News. “Counties are assigned to a tier based on metrics showing the speed and the spread of the virus in their borders.” 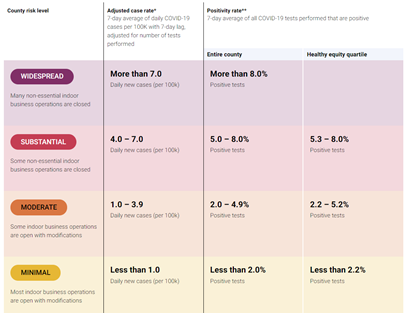 As with air quality, you’d be justified in assuming that pandemic warnings were standard across the country. Wrong again! When a color system is used, it tends to vary from state to state, as do the metrics on which it’s based. Colorado, for example, has green (“protect our neighbors”) and blue (“cautious”) tiers, as well as yellow, orange, red, and purple (“extreme risk”), based on new cases, test positivity rates, and hospitalizations. Indiana uses blue, yellow, orange, and red “zones” based on test-positivity rates only. Washington State has blue, gray-green, yellow, and orange “phases.” And so on. Meanwhile, the federal Centers for Disease Control has its own soothing spectrum to represent average daily cases: mint green, seafoam, aqua, cerulean, royal blue, and indigo. (Those are my color names; I couldn’t find a CDC color translator.) In June, CDC guidance for cruise ships included just three categories: green, yellow, and red.

In conclusion, the United States of America is a land of contrasts.

Purple, you may be interested to know, is a very old word whose meaning and pronunciation have shifted over time. It came into Old English from Latin around 900 C.E., and it originally referred to a deep crimson-red color obtained from the shell of a mollusk; now, of course, it’s a blend of red and blue. The word was purpura in Latin (liquid vowels tend to move around in languages), derived from Greek porphyra; earlier than that, the etymological trail disappears. “Born to the purple” (c. 1681) means “born into a family of kings or emperors”; the Purple Heart, a US decoration for service members wounded in battle, was instituted in 1932. “Purple haze” is 1960s slang for LSD. “Purple prose”—ornate or fussy writing—came into the language around 1901. And the earliest usage of “purple state” to refer to a state evenly balanced between Republican (“red”) and Democratic (“blue”) voters is from a CNN news program in 2002: “In the 2000 election year of red states or blue, Florida was purple. It is up for grabs, in play, a toss-up state, ergo a high traffic area for politicians.”

Posted at 06:00 AM in Colors, Coronavirus, Disasters, Fire, Government, Word of the Week, Word of the Year | Permalink

I always thought that, like "orange," "purple" had no words with which it rhymed; however, Wikipedia lists these three: "curple, the hindquarters of a horse or donkey, hirple, to walk with a limp; and nurple, the act of roughly twisting a nipple." Hmm. I suppose it's true -- you do learn something every day.