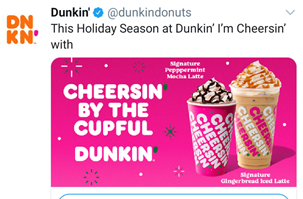 “Cheersin’ by the cupful”: a promoted tweet from Dunkin’ that I noticed (and retweeted) on November 17, 2020. The cheersin’ beverage need not be alcoholic.

It seems I was late to the party. Cheersing, with the final g, was logged in Urban Dictionary exactly 15 years ago, on December 28, 2005; the definition reads, in full, “from the verb to cheers,” which apparently was so familiar that no further defining was required. The example sentence: “When we raised our glasses, I saw Dick and Jane cheersing.” What exactly were Dick and Jane doing? Raising their own glasses. Maybe saying “Cheers!” Not toasting, exactly, which implies an honoree. Just clinking and … cheersing. 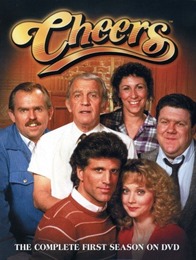 I don’t know how I’d avoided cheersing for so long. It’s all over Twitter, mostly among People Younger Than I Am. And it’s clearly caught on with ad agencies, for what to my wondering eyes did appear on December 17? This promoted tweet from Heineken.

It took me a few rounds (of reading! of reading!) to untangle “It’s not what you cheers to, it’s who you cheers with,” but I finally translated it as: “No matter the occasion, drink [Heineken beer] with people whose company you enjoy.” Which does, I admit, sound a tad stuffier than “who you cheers with.”

And so, with a new(ish) verb in our vocabulary, let’s say good riddance to this blighted, benighted year and toast the hopeful new one. Cheers!

UPDATE: Thanks to Nancy Davis Kho of Midlife Mixtape for alerting me to the Bachelorette/cheersing connection. “This season’s Bachelorette was forever saying to her stable of D-list celebrity Instagram influencer suitors, ‘Should we cheers that? Lets cheers to love!’ and I’d yell OMG it’s NOT A VERB.” Or as that Bachelorette, Tayshia Adams, told Glamour magazine: “When someone would do a cheers, we would all cheers and start screaming.”

Tangent #1: The migration of cheers from interjection to verb reminds me of something similar that happened to versus, which begat a new verb, to verse [another person or team], sometime in the early 2000s. Neal Whitman wrote about this development in 2004.

Tangent #2: Why do we clink glasses and say “cheers”? The venerable Farmer’s Almanac explains it all for you. By the way, the English word cheer came from a French word, chiere, that meant “face.” That’s what cheer meant in English, too, for its few hundred years. Language: always languaging.

Posted at 06:00 AM in Advertising, Anthimeria, Australian, Beer, Food and Drink, Word of the Week | Permalink

Yes, it's been around a while. Here in Adelaide, Australia, I wrote a note for myself in 2011 that I saw a woman say “You cheersing?” to a young girl in a hotel beer garden. The girl was about 3 or 4, so presumably the two were related. I didn’t hear the girl's response, but I saw the action of the woman and other adults in the group – clinking glasses and saying 'Cheers'. I had never encountered the word 'cheersing' before then.

Today I noticed a similar (in more ways than one) word being used as a verb. David Graham wrote: 'A man cheesed for the cameras while lugging a huge lectern out of the building.' https://www.theatlantic.com/ideas/archive/2021/01/trumps-culture-impunity-produced/617638/