Local name of the year: Gerald

This is a story that began in Oakland, in a neighborhood adjacent to mine, and spread around the Bay Area, up into Canada, and all the way across the Atlantic. It is a story with many key performance indicators of 2020: aggression, fear, suspicion, threats, shaming, displacement, conspiracy theories, a public-space shutdown, and a Change.org petition.

Fittingly enough for this turkey of a year, it’s a story about a turkey. A three-foot-tall turkey named Gerald. 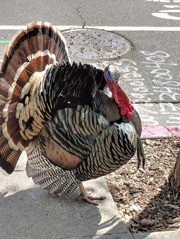 This may be Gerald, or it may be a lookalike who just happened to be strutting near the Rose Garden on Grand Avenue—a major urban thoroughfare—in March 2018, when I took his picture from a prudent distance.

Gerald liked to hang out with his avian lady friends at the Morcom Rose Garden, a seven-acre volunteer-tended park that has been pleasing visitors since it opened in 1932, a project of the New Deal Works Progress Administration. Nestled in a densely populated section of Oakland just a block from a major commercial street, the rose garden is “a birding hotspot,” according to the Golden Gate Audubon Society, where you might see hawks, wrens, warblers, scrub jays, and Steller’s jays. And, yes, wild turkeys.

No one seemed to know when Gerald had arrived or how he’d gotten his name. According to Kari Paul, who wrote an extensively researched and vividly written story* about Gerald for the Guardian (UK), it’s speculated that “the brood of rose garden turkeys to which Gerald belonged were forced there in 1991 following major fires that pushed them out of the nearby hills.”

And why was there a story about an Oakland turkey in a British newspaper? Because Gerald was a celebrity. And a troublemaker.

Beginning in May, when the rose garden was officially closed because of the pandemic but unofficially quite open, there were reports of Gerald attacking people. “I thought if I froze Gerald would go away,” a woman named Chelsie wrote on NextDoor. “I tried not to move my body. Gerald jumped on the top of my head and broke skin. I had to seek medical attention.” Another woman, Vanessa, wrote that Gerald “jumped on my back … but not before he was able to claw my inner thigh.” A May 25 story in the San Francisco Chronicle headlined “NIMBY turkey menaces visitors at Oakland rose garden” quoted a retired church administrator who said, “It was traumatic. All of a sudden it attacked me. … He got me with his talons and his wings.” Another NextDoor poster wrote: “I was getting flashbacks to the velociraptor scenes in Jurassic Park.”

People complained to local wildlife authorities without success. Turkeys, it turns out, are protected species. Gerald’s defenders observed that he was protecting his mates and chicks; Gerald’s detractors suggested feeding the bird to homeless people. (“Thanksgiving is coming up!”) On Reddit, “WithaK30” recommended reintroducing wolves to the rose garden, “and let nature regain her balance.” In the same Reddit thread, “Versipellus” recalled an alarming yet somehow entertaining encounter:

I watched him chase around a woman with my gf last week. The woman was somewhere between laughing and crying, but then she started kicking the bird, which only made him more agitated. The kicking agitated some guy on a first date, who, trying to impress his lady, started yelling at the woman for kicking the bird and not simply shooing it away. A nearby volunteer instructed the woman to throw rocks or sticks at Gerald, which made the guy on the date get even angrier. Threats were tossed around, who's gonna kick whose ass, F word after F word. The volunteer walked over to the man, and they actually had a civil conversation about Gerald, how the volunteer has worked there for a decade, and how he was giving the distressed woman the exact advice animal control had given all the garden workers. The angry dude and the volunteer made peace, and even exchanged emails. Gerald quit harassing the woman once she realized she could just fucking back away from him and not kick the poor turkey. 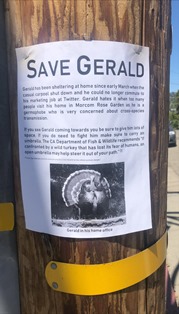 Some people blamed the humans who were feeding/taunting/photographing Gerald for provoking his behavior. Some people took the opportunity to point out the hypocrisy of sheltering a wild turkey while also feasting on domesticated fowl. Comparisons were made to “the criminalization and demonization of Black and poor people” that “was justified by dehumanizing them, and some of the worst parts of that history came alongside the violent hunting and mass extinctions of animals across the world.” Word began to spread that the city was going to “lethally remove”—murder!—poor Gerald, and a woman named Molly Flanagan started a Change.org petition: “Urgent: Protect Gerald the Rose Garden Turkey.” It received more than 13,000 signatures.

Gerald definitely had his fans, as noted on Twitter by Guardian reporter Kari Paul, who followed the story for months.

the latest installment of this saga is that people have put fan art of Gerald the Turkey all over the Rose Garden and he may or may not be executed next week https://t.co/AVEkEzesSR pic.twitter.com/saZdZAyJFv

The city did not “lethally remove” Gerald; instead, it closed the rose garden to humans for real on May 23, hoping that some social distancing would help Gerald simmer down. No such luck: “[P]eople continued to report confrontations on neighboring streets,” according to a story in Oaklandside.

Enough was finally enough: On October 22, Rebecca Dmytryk, director of California’s Wildlife Emergency Services, mounted a dramatic—and successful—bait-and-trap intervention. The Canadian radio program “As It Happens” reported that Dmytrk “took Gerald to a private property outside Oakland”—in Orinda, as a matter of fact—“where he has a stream, other turkeys to play with, and most importantly no people to attack,” which sounds lovely, and also like what parents tell children about dead pets. The story was also reported by CNN (“Aggressive Turkey Relocated”) and NPR’s “Morning Edition” (“The Reign of Gerald, an Aggressive Turkey, Is Over”).

In a long recap published on November 20 (“We Need to Talk About Gerald”), Oaklandside reporter Ally Markovich mused about Gerald’s identity (maybe he “was actually an imposter who killed the real Gerald in a fight last winter”) and the human-turkey relationship (“humans brought turkeys to California to be hunted, and the Department of Fish and Wildlife still considers turkeys a ‘nuisance’ animal, not an integral member of California’s ecosystems”). While Gerald was relocated, Markovich concluded, “he may not have been exiled. His new Orinda home is a mere seven miles away, a distance turkeys regularly travel within their habitats. It’s unlikely, but not implausible, that Gerald could return to the rose garden one day.”

Well, we all love a sequel, don’t we?

Want another helping of turkey? Read my May 2020 post about “cold turkey.”

* The Guardian story quotes a Nancy Friedman who is not me. Yes, there are two Nancy Friedmans residing in the same ZIP code, and yes, we have met and lunched together and talked about our all-too-common name.

Posted at 05:33 AM in Animals, Name of the Year, Naming, Oakland | Permalink