« Re-viewing America | Main | Names in the news: Bamlanivimab and beyond » 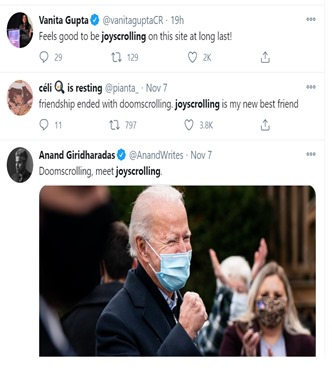 If you wanted a word that applied to mouse-enabled devices as well as haptic screens, you could try gleefreshing, a portmanteau of glee and refreshing.

Joyscrolling predates the election: Philadelphia Inquirer reporter Helen Ubiñas used it in a September 15, 2020, tweet and again in an article published the following day (“Take a Break from Our National Pastime of Doomscrolling for Some Joyscrolling”). UPDATE: Twitter user Hugo VK antedated joyscrolling to an un-bylined March 20, 2020, article about “digital wellness” in Myrth: “Instead of doomscrolling, try joyscrolling.”

Gleefreshing appeared in an article by Heather Schwedel (“We’re No Longer Doomscrolling. Now We’re Gleefreshing”) published in Slate on November 6, a full day before the AP broke the news. But as with many apparent neologisms, that isn’t the whole story. A different gleefreshing was defined in Urban Dictionary on April 20, 2010: “The act of refreshing your Facebook news feed constantly to see how many people quote the tv show Glee on their status.” (If you’ve forgotten “Glee,” or never knew about it, here’s a Gleefresher course.)

Glee and joy are old words, which gives them added resonance to our modern ears. In Old English, glee meant “entertainment” or “mirth,” usually with some sort of musical accompaniment. Glee club first appeared in 1814), building on the “musical entertainment” sense of glee. (See Lynne Murphy on glee club.) Joy crossed the Channel from France around 1200; it carried connotations of “sensual delight,” which may explain why we have joy-riding (an Americanism dating back to 1908) and not glee-riding.

Enjoy the moment, but gird your loins for a lot of tough challenges ahead. There are those US Senate runoffs in Georgia, for starters. And, lest we forget, the COVID pandemic is still very much with us.

Posted at 07:00 AM in Neologisms, Politics, Portmanteaus, Word of the Week | Permalink

I have enjoyed the creation of these two words. Just recently I had a discussion with my students about the importance of morphology in Linguistics. This is another proof that with morphological rules in their mind Language users (often unconsciousof those rules in them)can be able to coin new words, hence become productive.