« On the Visual Thesaurus: How we talk about the past | Main | Name in the news: Alejandro Mayorkas »

Fwiw I don't think Biden himself is buckraking. The rest of the article is still interesting, but also the point is not whether it's a good article but whether this type of story is legitimate at all. I think folks would plainly agree if it was about trump folks

Anyway, noteworthy that the Vox scribe has retracted his reflexive “savvy & realistic” defense of Blinken’s buckraking. I think many in media, academe & the NGOs are going to wind up similarly chastised for mouthing 1995-era @newrepublic blather, as ppl are tired of that shit. https://t.co/rJbNNrQeV2

(For some interesting non-buckraking background on Antony Blinken, see this Twitter thread by Andrei Cherny.)

Buckraking is a nonpartisan activity. Here, for example, is a paragraph from a November 2020 article in the left-leaning Jacobin magazine about the Fox News host Tucker Carlson’s ties to private equity:

But now, conference agendas obtained from state pension systems provide a glimpse into the lucrative world of “buckraking,” whereby political and media icons trade their fame for paid speeches to corporate groups lobbying the government. The documents spotlight several annual investor conferences held by the Blackstone Group and the Carlyle Group, two of the world’s most powerful private equity firms, with a combined $800 billion worth of assets under management.

Meanwhile, down on the farm, buckraking has a different and specialized meaning. A buck-rake is, according to the OED, “a large rake for farm use, frequently attached to a vehicle.” (The definition is entered under buck, which can mean “male of the species.”) The dictionary says the usage was “originally U.S.,” from the late 19th century, but all of the Google hits I found were from the UK. 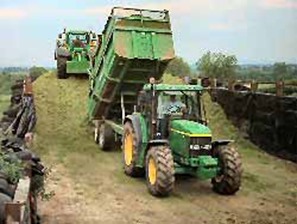 Buckraking silage, from the GreenHeyes Farm (Cheshire, England) website: “The job of buckraking is one of the most important during the silage making process as it is the driver’s job to pack the fresh grass into the silage clamp.”

Posted at 10:09 AM in Politics, Portmanteaus, Word of the Week | Permalink