Before Time(s). This phrase has become shorthand for “the time preceding the COVID-19 pandemic.” In his Word on the Street column for the Wall Street Journal, Ben Zimmer traced its current usage to mid-April 2020, and observed that it draws on “a longstanding trope in fictional accounts of life after some apocalyptic event, as portrayed in novels, movies, and television shows.” In Middle English beforetime or beforetimes could be an adverb meaning “formerly,” and it persisted in Caribbean English into the modern era. But the most influential and relevant “Before Time” before our time was probably a 1966 episode of “Star Trek.” Zimmer writes: “A young girl named Miri … explains how the planet’s grown-ups, known as ‘Grups,’ disappeared: ‘That was when they started to get sick in the Before Time. We hid, then they were gone.’”

Read the rest of “Into the Past.” 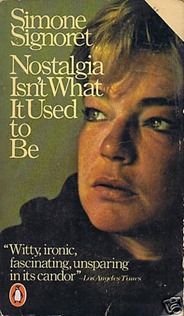 Nostalgia Isn’t What It Used to Be, actress Simone Signoret’s 1979 memoir.

Blog bonus #1! Here’s the first stanza of “Nostalgia,” one of my favorite poems by former US Poet Laureate Billy Collins.

Remember the 1340’s? We were doing a dance called the Catapult.
You always wore brown, the color craze of the decade,
and I was draped in one of those capes that were popular,
the ones with unicorns and pomegranates in needlework.
Everyone would pause for beer and onions in the afternoon,
and at night we would play a game called “Find the Cow.”
Everything was hand-lettered then, not like today.

Blog bonus #2! Read my old-school column about classic—the word, the trend, and the branding shorthand.

Posted at 06:00 AM in Nostalgia, Visual Thesaurus, Words, Writing | Permalink