Word of the week: Chump

At an October 24 drive-in rally in Bucks County, Pennsylvania, Democratic presidential nominee Joe Biden was heckled by small group of Trump supporters, who honked horns, waved flags, and shouted “Four more years!” Addressing his own supporters, Biden said: “By the way, we don’t do things like those chumps out there with the microphone are doing, the Trump guys.”

It didn’t take long for the derogatory term chump to circulate widely. Although some Biden supporters picked it up as an insult, the other side chose to reclaim it. Within minutes after Biden’s appearance, #TrumpChump had popped up on Twitter, appended to tweets like “I’m a proud TrumpChump!” and “Congrats everyone we’ve been promoted from a #Deplorable to a #TrumpChump.”

The body of the email:

(I am not a Trump supporter. I get fundraising emails from all sides.)

Chump is a classic Biden-ism: quaint, folksy, and G-rated—not unlike malarkey, Biden’s signature slang term from the 2012 campaign. (Read my post about malarkey.) And it rhymes with Trump, making it eminently sloganizable.

Chump wasn’t always an insult. It originally referred—and still does, in some quarters—to “a short, thick lump of wood chopped or sawn off from timber.” It first appeared in print in 1680, and seems to have arisen in parallel with chunk, possibly influenced by lump, stump, or clump. 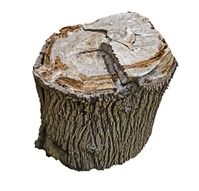 By the mid-19th century, chump was being used metaphorically to mean “head,” in much the same way as “block” was (“He’s off his block!”). And by the 1880s, a chump could be a person “as unintelligent as a block of wood.”

But the American sense of chump goes beyond “stupid” to suggest “unsophisticated” and “gullible.” A chump is a patsy, a sucker, an easy mark. 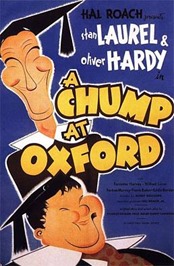 In A Chump at Oxford (1940), Stan and Ollie decide to get an education because, as Stan puts it, “We’re not illiterate enough.” Watch the full movie.

Green’s Dictionary of Slang’s earliest citation for the “gullible” sense is from the Atlanta Constitution in August 1915: “The underworld saw John Burglar metamorphose overnight from a ‘chump copper’ to a precinct captain reputed to be a ‘wise guy’.” Damon Runyon, newspaperman turned Guys and Dolls guy, was fond of chump: He used it 13 times in short stories collected in Damon Runyon’s Omnibus. A sample:

But of course The Lemon Drop Kid is by no means a chump, and he does not even slacken up, let alone stop, until he is well beyond the gates, and the sleuths are turning back, and what is more, The Lemon Drop Kid takes the road leading out of Saratoga instead of going back to the city, because he figures that Saratoga may not be so congenial to him for a while.

Chump change—a trivial amount of money—originated in African American English. Surprisingly, though, the earliest citation in Green’s Dictionary is from the Congressional Quarterly Weekly Report: “Today, even five thousand dollars seems like chump change.” That was in 1956, which suggests that the term had been around for a while outside the congressional chambers.

The juxtaposition of chump and Trump isn’t new. Urban Dictionary has a March 2017 entry for “Trumpchump”: “A person with a monkey like brain who still supports president trump [sic].” Also in March 2017, New York Times columnist Timothy Egan wrote an op-ed for the paper headlined “Trump’s Chumps.” The lede:

You voted for a man who boasted of sexual assault, a man whose “university” defrauded thousands of people, a billionaire who thought the minimum wage was too high. You switched from Barack Obama in 2012 to Donald Trump in 2016 — one in four white working-class voters — because you thought he was on your side.

“Trump is a chump” decal from Dump Trump Decals

And the reclaiming of chump as a badge of honor isn’t new, either. I wrote in September 2016 about how Hillary Clinton’s “basket of deplorables” comment had been taken up by her opponents, including Roger Stone, who tweeted on September 10, 2016: “I am so proud to be one of the Deplorables.” In November 2019 Stone was convicted on seven counts, including witness tampering, and sentenced to 40 months in federal prison. The sentence was commuted by Trump in July 2020. 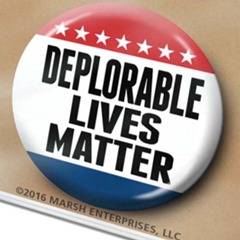 And if you want to wave your chump flag this time around, plenty of swag vendors have materialized overnight, all eager to separate you from your money. 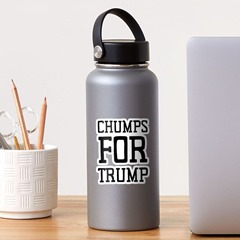 “Chumps for Trump” decal via Redbubble

Posted at 10:48 AM in Current Affairs, Politics, Slang, Word of the Week | Permalink