« On the Visual Thesaurus: Poll stars | Main | Word of the week: Chump »

Have you ever wished there was a word for “words that elicit amusement due to the way they sound”? Well, there is one now: risonym, coined by linguist Arnold Zwicky from Greek (-nym = “name”) and Latin (ris- = laugh) roots.  Read more about risonym, and about the curious origins of howitzer, on Mike Pope’s blog.

Deb Amlen, senior staff editor of New York Times Wordplay, wrote about Spelling Bee, a daily word-search game that’s “not only highly addictive and satisfying to the many people who play it, but … can also be humorously infuriating to the devoted.” Chief among those devotees is Bostonian Deb Koker—what is it about word-game mavens and the name Deb?—who rises at 3 a.m. Eastern every damn day and posts her perfect “Queen Bee” score an hour later. (Hat tip to my #BeeBest pal Diane Fischler.) 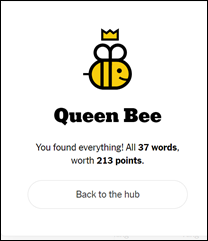 One of my own infrequent Queen Bees, achieved on September 20. I learned from Deb Amlen’s story that the cute bee icon is named Beeatrice.

Ignore the judgmental tone—“some of the worst slang to come out of the English speaking world”—and enjoy this “quaran-dictionary,” a collection of coronavirus coinages in The Tab (UK). I’ve been keeping tabs myself; start here.

Ben Zimmer wrote for the Wall Street Journal about how karma migrated from its Hindu-Buddhist roots to becoming “thoroughly commercialized.” I’m quoted about some of those commercial applications. (May be paywalled.)

Science writer Ed Yong, one of the most reliable sources for COVID-19 information, wrote for The Atlantic about why “strength” and “fighting” metaphors are inappropriate and even harmful in talking about disease: “When we use ‘strength’ to describe muscles, immune systems, personality, morality, and political power, meaning hops from one sense to another.”

And speaking of music, here’s a plug for my nonprofit client the Amateur Music Network, which is doing wonderful work keeping musicians in touch and in tune. On November 21, clarinetist Jeff Anderle will lead a “Weird Sounds” online workshop, which sounds like crazy fun. On December 5, the pianist and radio host Sarah Cahill will talk about creating and presenting new music. And for six weeks in November and December, AMN is hosting Singing Saturdays, led by San Francisco Symphony Chorus Director Ragnar Bohlin. I’ve been writing interviews for the AMN blog—check them out!

Burma-gram—on Instagram and Twitter—updates the classic Burma-Shave “verse by the side of the road” format for social media. 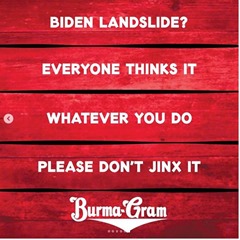 Learn more about the original Burma-Shave ads, which dotted U.S. highways from 1929 through 1963, in this enjoyable and lavishly illustrated article published in Print magazine in 2012.

When shitshow made the news after the first presidential debate, James Harbeck wrote for Strong Language about how the word was translated around the world. (Strong Language)

Click through to read the whole thread: a taxonomy of newspaper names from NYU journalism professor Jay Rosen.

I had the help of one of my Twitter followers, @BalanceTheCheck, who collected the names of hundreds of newspapers (The Herald, The Star, The Enquirer, etc.) which he put into a spreadsheet... 1/