« The good plaice | Main | On the Visual Thesaurus: Poll stars »

Me and my sister Chevelle Brooks, we always say, Hey, jush, what you doin’

We spell it J-U-S-H. We took the P out of push and just added a J

I’m getting my jush making a video

It’s a noun in all these examples, with no specific meaning—it’s almost a placeholder, like whatchamacallit. But listen to the first few seconds of the video:

The word jush means … you know, you fixin’ somebody up, like “Let me jush you up before you go out there. That’s what it means—that’s the the old school.

Old-school jush—a verb—is usually spelled zhuzh (or zhush, jusj, zhuzh, tszuj, or zhoosh). The Merriam-Webster blog credited its spread to the first incarnation of “Queer Eye for the Straight Guy,” which aired from 2003 to 2007:

A go-to word for Queer Eye’s original fashion guru, Carson Kressley, zhuzh describes the act of making slight improvements or accents to a wardrobe or look (such as by adding a pocket square, teasing one’s hair, or popping a shirt collar).

In 2019, Kressley told Salon TV that he learned the word—which he insisted is spelled tszuj—when he worked for Ralph Lauren. “It’s kind of a Yiddish-Jewish-garmento kind of term,” he asserted.

But is it? Merriam-Webster cites the OED, which added zhoosh to its online dictionary in 2006 and identifies the word as “originally Polari”—a form of cant slang used by entertainers, carnival workers, and the underground gay subculture in Britain. (For more on Polari, see my November 2016 post on fake.) The OED’s earliest citation is from a June 2, 1977, article in the UK publication Gay News: “As feely homies..we would zhoosh our riahs, powder our eeks, climb into our bona new drag, don our batts and troll off to some bona bijou bar.”

(That’s a whole lot of Polari that you’ll have to look up for yourself.)

So “old-school” jush was a development of zhuzh (or however you want to spell it), a verb with a clear if hard-to-specify meaning that became—with a new spelling and a slight shift in pronunciation—an all-purpose noun, like the famous “context-dependent substitute noun” jawn, associated with Philadelphians.

Or as Jasmine Masters put it in June 2018: “It’s a good word just to fill in when you don’t want everybody to know our business.”

Using the name Martelle [sic] Robinson, Ms. Masters and two co-registrants filed for trademark protection of JUSH for hats, hoodies, sweaters, and T-shirts on August 30, 2017.  Registration was granted on January 8, 2019, and it appears that some products were manufactured and shipped. I couldn’t find any of those original products—or the fabulous fan in QueenBV59’s video—but there are plenty of jush-themed knockoffs. 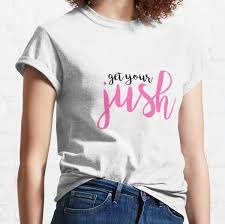 GET YOUR JUSH T-shirt by “Emospicex” on Red Bubble

In San Francisco, yet another Zhuzh “provides strategic design solutions to discerning clients”; founder Zack Shubkagel—is “Zhuzh” his nickname?—includes a pronunication tip (“/ZHo͝oSH/”) and does a nice job zhuzhing up the wordmark.

Postscript: QueenBV59 got her jush and she got her vote on.

I could be wrong, but I don't think it will ever be an everyday word. It's too hard to say—too much work. That's why "He doesn't" becomes "He don't." "Creek" becomes "crick." Or, "isn't" becomes "ain't". In my haughty opinion.