« Word of the week: Cottagecore | Main | The good plaice »

From Gropecunt Lane to Amen Corner: how British streets got their colorful street names. The Lithub article is an excerpt from Deirdre Mask’s The Address Book: What Street Addresses Reveal About Identity, Race, Wealth, and Power, which looks like a book I should own.

The namers of this neighbourhood in Porters Lake, Nova Scotia appear to have run out of ideas. pic.twitter.com/1u59LoUUEF

The Bird Names for Birds campaign wants to revise some 150 eponyms and honorifics that “enshrine figures who embraced racist and colonialist ideas and actions (including naturalist icon John James Audubon).” First to be renamed: the McCown’s Longspur, originally named for a Confederate general. It’s now the Thick-billed Longspur.

When a lazy naming agency works with a fearful client, the result is often what Igor International calls a “happy idiot” name: “the fastest, smoothest route to client buy-in on a name, with the least amount of effort by the agency.”

“Many new companies’ initial names and logos are ill-considered and quickly changed,” writes Emblemetric’s James L. Bowie. “But Spotify is an interesting example of a business that started with a bad name and logo and just stuck with both.” Interesting data nugget: “Currently, according to USPTO records, there are 2,330 live, or active, U.S. trademarks ending in ‘-ify’ and 3,063 live logos featuring sound waves, compared to 2,153 ‘-ifies’ and 2,948 sound wave logos that have ‘died’ due to abandonment, cancellation, or expiration. With each passing year, it seems likely that fewer such marks will be registered and more will die off, and as a result, Spotify’s name and logo could appear relatively more distinctive in the future.”

Meatless Farm, a British vegan-foods company that makes burgers and other products from pea protein, is parlaying its initials into a slightly sweary ad campaign. 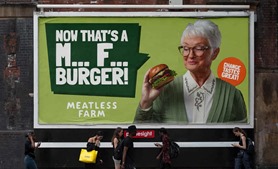 I have Rochelle Kopp to thank for this news flash about Taco Bell’s Jalapeño Noir, a name that makes sense only if you ignore the tilde and pronounce the e in Jalapeño like the i in Pinot.

Sincerely wish I could have been a fly on the wall at the product development meeting where Taco Bell decided to name its wine Jalapeño Noir https://t.co/YnpaYVuwj3 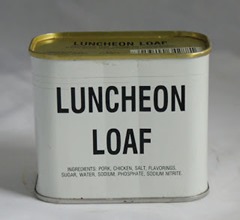 Generic luncheon loaf via History’s Dumpster, a dormant blog dedicated to “famous and infamous pop culture junk and oddities of yesterday and today. Saved from the landfill of time.”

What to title the novel? Depends on the stage of the creative process you’re in, according to cartoonist and illustrator Grant Snider.

Linguist, author, educator, and NPR language commentator Geoffrey Nunberg died on August 11. I had the pleasure of meeting him on a couple of occasions, and I’ve bought and profited from a couple of his books on language. In his honor, Ben Zimmer posted a link to a 2004 op-ed Nunberg wrote for the New York Times. It’s headlined “Do Not Go Gently: Geezers, Gerries, and Golden Agers,” and it concludes, elegiacally: “The youthfulness of our generational language may make it even harder for us baby boomers to come to terms with our lengthening demographic shadow.”

Re: Street names: I remember my mother-in-law talking about an area (in Pennsylvania maybe?) that had street names like "B Street" and "Not B."

Absolutely couldn't care less about the evolution(?) of the Spotify logo. Truth be told, I'm not sure I'd ever seen it before this article (I'm not sure - perhaps I do live under a rock). But lately I've been wondering about the name. To my ears, "Spotify" sounds like something that occurs in underpants, definitely not a positive image.