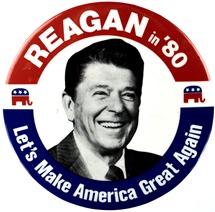 Posted at 11:41 AM in History, Politics, Slogans and Taglines, Words | Permalink