Coronagrifting Architecture critic Kate Wagner, best known for her McMansion Hell blog, coined coronagrifting in a May 23 post about “a new kind of virus in its own right: cheap mockups of COVID-related design ‘solutions’ filling the endlessly scrollable feeds of PR-beholden design websites such as Dezeen, ArchDaily, and designboom.” (Emphasis in the original.) It isn’t limited to design, though; you can find coronagrifting in the glut of “Zoom-worthy bling” and “the nonprofits grifters who want a cut of the coronavirus bailout.” Hat tip: Jonathon Owen. More on grift in this 2012 post of mine.

Fan cutout. With sports stadiums empty of fans, teams are hustling for virtual attendance. For a fee, you can have your photo transferred to a cardboard replica that will occupy your seat in the bleachers or the boxes and presumably be spotted by TV cameras. Also called fan board—possibly the UK preference. (Hat tip: Tony Thorne, who’s been keeping his own list of “coronaspeak.”) 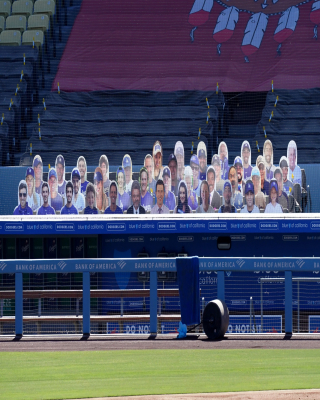 Los Angeles Dodgers fan cutouts. Prices vary according to stadium section: $149 to $299 each

Insinuation anxiety. “The fear of suggesting that other people are untrustworthy.” The term predates the pandemic—I found it in a 2018 journal article that’s subtitled “concern that advice rejection will signal distrust after conflict of interest disclosures”—but it’s gained new currency now that “every drinks date or meet-up in the park” feels “fraught,” as a July 23, 2020, article in Vox put it without referencing the source of the term. (Hat tip: Tony Thorne)

Safecation. It’s “the best way to travel this summer” (Yahoo News) and “this summer’s smartest travel trend” (Real Simple). It’s also the latest -cation portmanteau to build on the success of staycation, which I wrote about in 2008, and griefcation, which predates the pandemic. How to do it? Check rules and regulations before you leave, pack hand sanitizer, wear a mask, maybe bring your own food, try camping. and—duh—don’t travel with someone who’s sick.

Twindemic. As flu season looms, doctors and epidemiologists are warning about the coexistence of two widespread, life-threatening diseases. “The concern about a twindemic is so great that officials around the world are pushing the flu shot even before it becomes available in clinics and doctors’ offices,” the New York Times reported on August 16. It was the first time the word had appeared in the Times, according to a Twitter bot that tracks such things.

Pandemic (verb).. Used for the first time in the Times on August 4. The spelling of the past tense and participle—with the addition of k—follow the pattern of picnicked and panicked.

So "zutor" is supposed to mean "Zoom tutor"? To me it sounds like some new courting trend.

UPDATED to include business isolation, a pandemic dress code.

A New Yorker “lexicon for a pandemic,” posted July 13, is meant to be facetiously madeupical (“overdistancing,” “face naked”), but one word on the list, “maskhole,” has in fact entered the real-world lexicon, if not entirely in the New Yorker’s sense of “wearing a mask in a way that makes it completely ineffective.” A July 1 op-ed in the Lexington (Kentucky) Herald-Leader ran under the headline “Don’t Be a Maskhole,” and made it clear what maskholes really are: “You ‘maskholes’ who don’t wear masks, whether it’s because you don’t care or because it’s a smirking symbol of your politics, are killing your fellow citizens.” Maskhole was entered in the Urban Dictionary on May 11, 2020: “selfish idiots in my neighborhood who think that they don't need to wear a mask because the rest of us do.” In case you hadn’t figured it out, maskhole is a portmanteau of mask and asshole.

And search the “coronavirus” tag on this blog for more words and brands associated with COVID.

Posted at 05:00 AM in Coronavirus, Neologisms, Portmanteaus, Words | Permalink

Re: inflecting 'pandemic' (I expect you know this, but perhaps some of your audience does not):

Adding K before the inflections is actually following standard English spelling rules. One of the lesser known rules is that when you add a suffix beginning with E, I, or Y to a word ending in C, a K gets put in between if the pronunciation of the C is not to be changed. Examples are panicky and mimicked. However, if the pronunciation does change, then no K is inserted. Example: lyricist.

Unfortunately, the rule is not well known and thus often violated. For example, you can use Google to find that Quebecer is a much more common spelling than Quebecker.

Dan: This is excellent information. Thanks!