« Coronacoinages IV | Main | How MoveOn got its name »

Speaking of pods, Language Log’s Mark Liberman considers the implications of pod to refer to “the people you’re cooped up with during the pandemic.” Read the comments, too.

Beyond Wordplay is a new blog about word puzzles, contests, and games. Contributors include software developer Adam Aaronson, logophile Eric Chaikin, and the nigh-ubiquitous word maven Ben Zimmer; topics have included the “explosion” of online crossword tournaments and other forms of organized wordplay since March, when the pandemic forced the cancellation of in-person events.

A teenager gathered more than 5,000 signatures on a petition demanding that the grocery chain Trader Joe’s change brand names like Trader José and Trader Giotto that perpetuate “a narrative of exoticism that perpetuates harmful stereotypes.” The company, which is based in Southern California, gave it some thought and decided to keep the names. “Bravo,” writes linguist John McWhorter in The Atlantic: “We must certainly submit what we consider funny to periodic reexamination, and be vigilant about the dangers of stereotyping. However, petitions must also be subject to examination and vigilance, because they can function in ways that are less progressive than puritan.”

Sports teams named for food: a thread by Erin Scafe.

To celebrate its 175th anniversary, Scientific American has created visualizations of the most frequently used words in all 5,107 issues of the magazine. “Epistemic virtues (which are to knowledge what moral virtues are to goodness) such as ‘certainty,’ flanked by its boon companions ‘universal,’ ‘rational’ and ‘truth,’ spiked in the middle decades of the 19th century, whereas clusters such as ‘imagination,’ ‘intuition,’ ‘conjecture’ and ‘interpret’ peaked suggestively between the 1950s and the 1970s.” 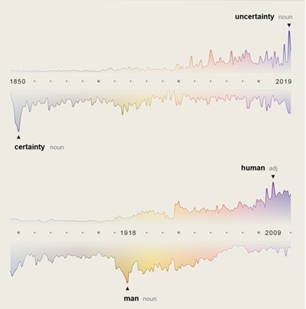 DAMWeather, a project of weather writer Dennis Mersereau, calls The Weather Channel’s “COVIDCANE”—a portmanteau of COVID and hurricane—“a mockery of this crisis and its own legacy.” Trademark lawyer Jessica Stone Levy calls it something else.

Former New Yorker proofreader Mary Norris, author of Between You and Me: Adventures of the Comma Queen, returns to the magazine to review two wordy treats: Stet!, a card game created by Benjamin Dreyer and based on his bestselling book Dreyer’s English; and That Word Chat, a podcast about—you guessed it—words and language hosted by editor Mark Allen. (I reviewed Dreyer’s English in March 2019.)

On Poynter, Roy Peter Clark admires Ed Yong’s 212-word “sentence of the year” in an Atlantic article headlined “How the Pandemic Defeated America.”

Yong makes it work with a little help from his language friends. They are: placement of subject and verb; the word “that” used as a conjunction; and, of course, the semicolon. Not just one semicolon, mind you, but eight. In one sentence.

I have a runner-up: a 193-word sentence in Kurt Andersen’s Evil Geniuses: The Unmaking of America: A Recent History that contains nine semicolons. (And let the record show that the book’s title contains two colons, a rare feat in itself.) 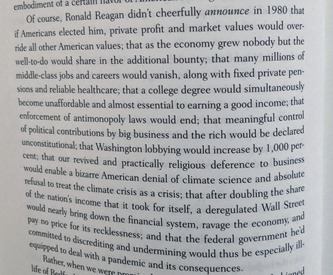 Why all bank logos look the same, by James L. Bowie, whose excellent Emblemetric blog I’ve cited here on many occasions.