“The scourge of hygiene theater” is part of the URL for an article about COVID-19 by Derek Thompson published Monday in The Atlantic. (The headline reads “You Can Stop Cleaning Your Mail Now.”)

Our “obsession with contaminated surfaces,” Thompson writes, is distracting from “more effective ways to combat COVID-19.” It’s an expensive obsession: New York City’s transit authority will spend more than $100 million this year on “new cleaning practices and disinfectants”—shutting down subway service for hours to do so. Meanwhile, a mounting pile of evidence shows that surface transmission of COVID is rare. This virus is spread through airborne person-to-person transmission, especially in indoor spaces.

All that zealous cleaning, Thompson writes, is a kind of performance art:

There is a historical echo here. After 9/11, physical security became a national obsession, especially in airports, where the Transportation Security Administration patted down the crotches of innumerable grandmothers for possible explosives. My colleague Jim Fallows repeatedly referred to this wasteful bonanza as “security theater.”

COVID-19 has reawakened America’s spirit of misdirected anxiety, inspiring businesses and families to obsess over risk-reduction rituals that make us feel safer but don’t actually do much to reduce risk—even as more dangerous activities are still allowed. This is hygiene theater.

Thompson didn’t coin hygiene theater. I first encountered it in a footnote to a June 5 post by Mike Pope, who often blogs about words and language. This time his subject was a genuinely new term, ally theater, and in the footnote Mike wrote: “I have a grumpy feeling that some part of what we’re seeing the with the anti-COVID measures is ‘hygiene theater.’”

To my surprise, when I started poking around this week I found a usage of hygiene theater from even earlier in the pandemic, when a lot of people (including, of course, the occupant of 1600 Pennsylvania Avenue) were dismissing the virus as “just the flu.” On March 6, Bob Cooney, a consultant to the recreational virtual-reality industry, wrote that while “there are so many things that are more threatening to life and safety than this particular strain of bug.” VR-arcade operators should “PRACTICE HYGIENE THEATER” (caps sic):

Make a big deal about your cleaning regimens. If you have a free roam set up, put up a sign that says “Cleaning Station” where you keep your supplies and make sure that the cleaning happens in the public eye. If you’re running single player stations, make sure that the cleaning supplies are in clear view. Let the customers see your employees cleaning. And not just the masks, they should be cleaning controllers, bathroom doorknobs, computer monitors, and anything else that can be touched. Remember it’s theater, make a show of doing it.

Nor is the comparison to “security theater” wholly original. On April 29, radio personality Tom Leykis used this headline over a reader comment: “9/11 gave us security theater, ’rona gave us hygiene theater.” (The commenter himself concluded: “Tom has said this nation is full of pussified men, well, this is the outcome.”) “Beware Hygiene Theater”: slide from an undated COVID-era presentation to an Arizona business group. No further explanation is offered.

Once upon a time, “hygiene theater” was theater about hygiene. That time was shortly after the Bolshevik Revolution, when, in the newly formed USSR, propaganda about health and illness was disseminated through “sanitary plays” about syphilis, tuberculosis, drunkenness, and other maladies. 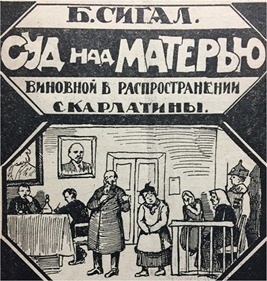 “Trial of the mother accused of spreading scarlet fever.” Poster for a Soviet hygiene-theater production, 1925. Source: History of Knowledge

From an article by Oxana Kosanko and Igor Polianski for History of Knowledge:

In the 1920s, hygiene theater productions were informed by a faith in the value of deterrence. They informed the audience in detail about the contagion risks, symptoms, and effects of dangerous diseases. With the transition to socialist realism, however, hygiene propaganda focused on other topics. Instead of realistically depicting diseases and unhealthy lifestyles, socialist realism depicted the future life ideal that Soviet society was working toward. Thus, the Moscow Theater for Sanitary Culture reoriented its discursive strategies from showing disease to portraying health in its plays.

Live theater, by the way, is another thing I’m missing. But I absolutely will not miss hygiene theater if and when it’s consigned to the dust heap of history.

* I do not miss Sarah Palin.

Posted at 06:45 AM in Current Affairs, Medicine, Word of the Week | Permalink

As one who quickly tired of sanitizing surfaces, I appreciate the comfort this piece brings.
The only good thing Donald Trump has done, is to have made Sarah Palin disappear.